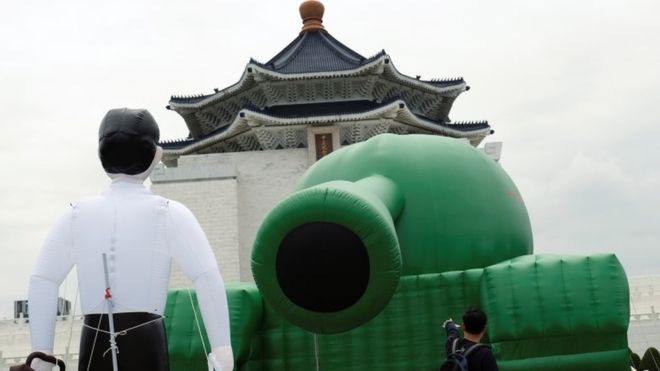 A Taiwanese artist has created a giant inflatable depiction of the iconic "tank man" scene to mark 30 years since China's bloody crackdown on pro-democracy protests.

The photo of a man standing in front of a tank in Beijing's Tiananmen Square became one of the most famous photos of the 20th Century.

The balloons are on show by the Chiang Kai-Shek Memorial Hall in Taipei.

Reporting of the crackdown is heavily censored in China.

The photo of a man in a white shirt - who has never been officially identified - standing in front of a convoy of tanks has become a symbol of peaceful resistance across the world.

He was later pulled away from the scene by two men. What happened to him remains unknown.

The Chinese government has never said how many protesters were killed, although estimates range from the hundreds to thousands.

Shake, the artist who created the balloons, said she thought it was important the 4 June 1989 crackdown was never forgotten.

"As a Taiwanese I hope I can help China to also achieve democracy one day," she told Reuters news agency.

"This thing has already been washed away by [China's] authoritarian political view," she added, noting that both Hong Kong and Taiwan were commemorating the event.

Taiwan has been independent since 1950, but China regards it as a rebel region that must be reunited with the mainland.