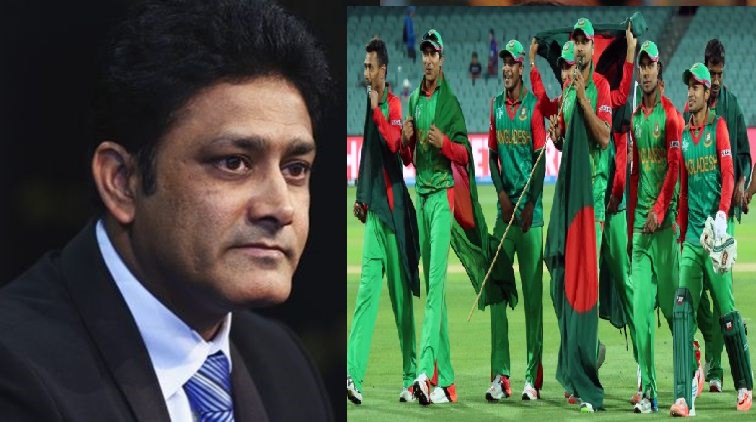 With a cruising victory for the Bangladesh cricket team in the recently concluded ‘Ireland Tri-Nation series’, they’re now being considered as a strong 15-member squad for the upcoming ICC Cricket World Cup 2019, that starts on May 30 in England and Wales. The victory was possible with the expertise of their experienced cricketers and hence former Indian skipper Anil Kumble believes that it wouldn’t be right to take Bangladesh lightly during the World Cup contest.

The tri-series contested between the three teams hosts Ireland, West Indies and Bangladesh- saw the Bangla Tigers remain undefeated in the entire tournament. By winning the contest Mashrafe Mortaza & Co. have created history as it’s Bangladesh team’s first ever tri-series triumph. Mortaza’s captaincy has brought to the unit the confidence that it requires to do well in the showpiece event.

The team has a talented bunch of young and experienced cricketers and if they don’t choke in crunch situations like they had in the past, it makes them a team to be wary of. The Bangladesh team has already started their camp in England ahead of the scheduled warm-up games that commence on May 24. The Tigers will play two warm-up games, against Pakistan and India.

In this light, former Indian captain and coach Anil Kumble has warned other teams to not take Bangladesh lightly. He also lauded captain Mashrafe Mortaza, who will be playing his last World Cup and said that they will be a “different team” under his leadership. Apart from Mortaza, Kumble also hailed Tamim Iqbal as one of the best openers in the current scenario. He also praised the experienced players in Shakib Al Hasan and Mushfiqur Rahman who have consistently done well for the team over the years.

Bangladesh will be a different side, says Kumble

“You can’t take Bangladesh lightly anymore,” Kumble was quoted as saying on CricketNext in a chat. They have done really really well over the last few years. Mashrafe Mortaza is a very good leader. He has rallied around the team and takes the right decisions. When he will be captaining, one will see a different Bangladesh team,” he added.

Having praised them, Jumbo also raised one concern for the team: “When they get to those knockout matches, they somehow don’t lift their game. That will be the challenge that this Bangladesh team will have,” he concluded.

Bangladesh will begin their World Cup campaign on June 2, when they play South Africa at the Oval.