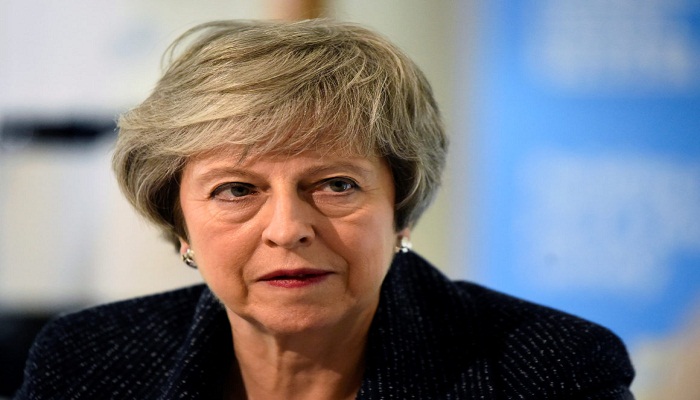 Theresa May will make the case for her new Brexit plan in Parliament later, amid signs that Conservative opposition to her leadership is hardening.

The prime minister will give a statement to MPs on her changes to the Withdrawal Agreement Bill - including her promise to give MPs a vote on holding another referendum.

But Labour MPs said too little had changed for them to come on board.

And one ex-Tory minister questioned whether June's vote would even happen.

MPs have rejected the withdrawal agreement negotiated with the EU three times, and attempts to find a formal compromise with Labour have failed.

On Tuesday, the prime minister asked MPs to take "one last chance" to deliver a negotiated exit - or risk Brexit not happening at all.

Conservative MP Boris Johnson - who wants to succeed Mrs May as prime minister - said on Twitter: "We are being asked to vote for a customs union and a second referendum. The Bill is directly against our manifesto - and I will not vote for it.

"We can and must do better - and deliver what the people voted for."

It's become a painful ritual of a tortuous process: the prime minister unveils a vision for Brexit, and MPs queue up to demolish it in the House of Commons. Today it looks like it is going to happen again.

If Theresa May's speech yesterday sought to attract switchers - and turn sceptics into endorsers - it failed.

Worse than that for Downing Street, some Conservatives who backed the plan when it was last voted on, now say they'll reject it.

Among many Conservative MPs, there is a bleak, end of day’s mood. Some wonder if it's even worthwhile putting the bill to a vote.

Others ponder getting rid of the prime minister even sooner than she's promised. But those around Theresa May insist they are not willing to give up at least yet - they are determined her plan will be put to MPs in around a fortnight's time.

Mrs May is bringing the Withdrawal Agreement Bill - legislation required to bring her agreement into UK law - to Parliament in early June.

In an attempt to win over Labour MPs, she announced the following concessions:

-A vote on different customs options, including a government proposal for a temporary customs union for goods - what Mrs May called a "customs compromise"

-If the backstop does come into force, the bill would guarantee Northern Ireland remains aligned with the rest of the UK and remains in same customs territory

-Legislation to ensure workers rights are "every bit as good, if not better" after Brexit - and guarantees of no dilution in environmental standards

Addressing business leaders on Tuesday, Chancellor Philip Hammond defended the plan, saying only a Brexit deal commanding the support of a majority of MPs would be legitimate.

"Britain needs a Brexit that feels like a compromise, that delights no-one but one that everybody, or nearly everybody, can live with," he said.

But Labour has said it is not willing to back the bill at second reading, meaning it could fail at its first parliamentary hurdle.

And Conservative MPs who backed Theresa May the last time she tried to get her withdrawal agreement through Parliament in March - such as Boris Johnson, Iain Duncan Smith and Dominic Raab - said they could no longer support her.

Former Work and Pensions Secretary Stephen Crabb said the prospect of another referendum was too much for many of his colleagues.

"I don't think there will be a vote," he said. "It won't pass. There is too much opposition."

The 1922 backbench Conservative committee is to meet on Wednesday amid reports of fresh attempts to force another confidence vote in the PM's leadership.

Tory MP Zac Goldsmith said it was time for Mrs May, who has already indicated she will leave office when the Brexit agreement is passed, to go now.

On Newsnight on Tuesday, backbench Tory MP Sir Bernard Jenkin said there was "a lot of affection and respect for Mrs May in the party - but a lot of anger at the mistakes that she has made".

He said the process for a leadership election would be "accelerated".

Meanwhile, DUP parliamentary leader Nigel Dodds said the main problem was the original deal Mrs May negotiated with the EU.

"We will examine the legislation closely when the bill is finally published but the fundamental flaws of the draft withdrawal agreement treaty itself remain unchanged," he said.

"Many of the proposals on the backstop serve as an attempt through domestic law to mitigate a bad deal, whereas the focus should be on getting a better deal."