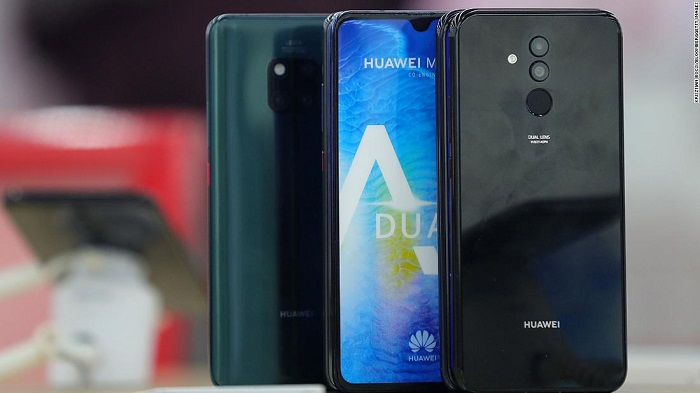 In little over 30 years, Huawei has gone from scrappy startup to China's most successful global consumer brand. Now it could become the first big casualty of an escalating fight with America over trade and the future of technology.

Huawei's smartphones are more popular than Apple's iPhone, and sales have been growing faster than Samsung. The company was aiming to become the world's biggest smartphone brand by next year, and lead the global rollout of next generation super-fast 5G wireless networks.

Then President Donald Trump slapped it with a US export ban, barring American companies from selling components and software to Huawei without first obtaining a license. The ban has already led Google to block new Huawei devices from licensing its Android operating system, as well as popular apps and services. (Existing phones will be exempt, for now.)

Huawei insists its business can withstand the crisis, reminding customers of the company's history as a fighter that will do whatever it takes to survive.

"The current practice of American politicians underestimates our strength," Huawei founder and CEO Ren Zhengfei said in an interview with state broadcaster CCTV on Tuesday.

The United States and China have been embroiled in a bitter trade war for more than a year, and Huawei could serve as an enormous bargaining chip to force Beijing's hand. Huawei has built up a dominant position in 5G, technology that is critical to future services the United States wants to lead.

Ren, a former engineer in the Chinese army, said that despite the conflict, the company ultimately needs to work with the United States to be successful.

"We sacrifice ourselves and families for our ideals," he said. "We clash with the US at the highest level, but ultimately have to contribute to humankind together."

The road to smartphone dominance

Huawei has come a long way from its inception as a supplier of cheap telephone switches in the 1980s. The company said it saw the potential of cell phones in the 1990s, when millions of rural Chinese started migrating to cities in search of work at factories. It caught the wave of the smartphone revolution in the 2000s, when it started making phones for European carriers Vodafone (VOD) and 3.

Today, Huawei is the world's No. 2 smartphone maker. Its phones are often lauded for their high-end features and cameras and relatively cheap price tags.

Huawei overtook Apple in 2018 and has been nipping at Samsung's heels. Samsung shipped roughly 72 million phones in the first three months of this year, compared with Huawei's 59 million and Apple's 40 million, according to research firm Canalys. That translated into 17% of the global market for Huawei, according to research firm Counterpoint, behind Samsung on 21% but ahead of Apple on 12%.

That trend to global leadership is now threatened by the Trump administration's ban on the company.

Huawei recently started offering its own services, including an app store, on mobile phones. But other companies have tried offering their own ecosystems with little success, according to Nicole Peng, an analyst with Canalys.

Huawei was trying to see if they could survive without Google Play, but most of the users of Huawei's app store are in China, where Google is blocked, Peng said. Samsung has also had little success in breaking its dependence on Android.

Most Samsung consumers still use Google Play instead of the South Korean company's Galaxy App Store, she noted. Microsoft and Nokia also failed to convince a critical mass of developers to make apps for their stores.

Bryan Ma, an analyst with research firm IDC, said that if Google doesn't get a license to sell to Huawei, the ban will begin to bite in the second half of this year, as the company launches its new models.

"At the very least, we know the Google apps won't be available, and that could be crippling," said Ma.

Those phones may also be cut off from Google services. That means third-party apps like ride-hailing and food delivery platforms that rely on Google Maps won't work on a Huawei phone, which would make for a terrible user experience, Ma said.

A major player in 5G

Huawei once struggled to build its own tech and provide reliable phone services to rural Chinese areas. Now, it is the world's largest telecommunications equipment maker and the global leader in the next generation of mobile networks. Huawei has signed dozens of commercial 5G contracts so far, including 25 in Europe and 10 in the Middle East.

But the company needs critical US parts and components to build 5G networking equipment. Huawei says that it's been stockpiling inventory and diversifying its supply chain for years, in anticipation of being cut off from US suppliers.

It may be able to fulfill current 5G contracts, but analysts say it would be difficult to continue rolling out 5G globally if Huawei is cut off from US parts and components for long. A long-term ban "would be critical," said Charlie Dai, an analyst with research firm Forrester.

In the interview with CCTV, Ren insisted that the US blacklist won't hurt the company's 5G lead.

"At least, our 5G [technology] won't be affected. And not only will it not be affected, but after two or three years, no one will be able to catch up with it," he said.