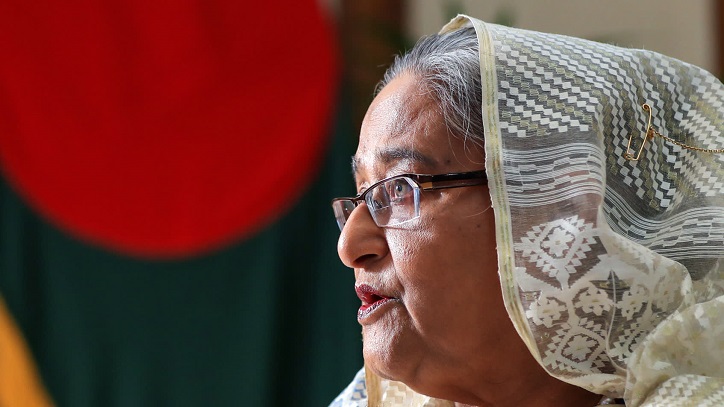 At the fateful night of August 15 in 1975, the cruellest assassination of history took place. The founding architect of Bangladesh, Father of the Nation, the glorious leader of Liberation War, Bangabandhu Sheikh Mujibur Rahman was assassinated along with most of the members of his family. Luckily his daughters, Sheikh Hasina and Sheikh Rehana, were in Germany then, and thus became the survivors. Later, Sheikh Hasina went to the United Kingdom from where she started movement against the autocratic rule in 1980. Sheikh Hasina was unanimously elected President of Bangladesh Awami League in 1981 in her absence. She was then forced to live in exile in New Delhi. Ending her six-year exile life, she finally returned home on 17 May 1981.

Returning home, Sheikh Hasina started her struggle in retaining people’s rights which were lost after the assassination of Bangabandhu. In doing so, she had to overlook red-eyes of the military rulers by risking her life. For her pro-people efforts, she became recognised as the ‘daughter of democracy’. In her long political career, Sheikh Hasina is going to make a history of running the state for 20 years as prime minister if she completes the current term. She took oath as prime minister on January 7 this year after winning the December 30 general election in 2018.

Sheikh Hasina first led Awami League to power in the 1996 general election, about 21 years after the killing of Bangabandhu. She formed the government for the second time on January 6 after winning the December 29, 2008 general election with an absolute majority in parliament. Sheikh Hasina took oath for the consecutive second term on January 12 after winning the January 5, 2014 election boycotted by the BNP-led alliance.

Under the leadership of Sheikh Hasina, the Awami League has been in power for 10 years. During the last 10 years of the Awami League government, Bangladesh has seen constant economic development and witnessed a period of stability, something that was absent in the early years of this century. In the last ten years, Bangladesh has seen remarkable progress in almost all major economic, social human development indicators. This has been coupled with major infrastructural undertakings, massive digitisation, and efforts to protect the environment, build resilience to natural disasters and climate change and ensure food security for the people.

The United Nations (UN) has recognised Bangladesh as a developing country. But during his visit to Dhaka in 1974, Henry Kissinger, the then US National Security Adviser and Secretary of State, under Richard Nixon and Gerald Ford administrations, termed Bangladesh as a ‘bottomless basket’. However, the UN classifies all countries across the world under three criteria, Least Developed, Developing and Developed Countries. The UN has recognised Bangladesh as a developing country, after graduating from ‘Least Developed Country’ (LDC) bloc. Bangladesh has fulfilled the eligibility requirements to graduate from LDC, as it has met all the three criteria for the first time for getting out of the LDC bloc. The three criteria include: Gross National Income (GNI) per capita, Human Assets Index (HAI) and Economic Vulnerability Index (EVI). The UN recognition would allow the country to start graduating from the LDC category and would have to qualify two more reviews in 2021 and 2024 by the same UN committee to get out of the LDC list.

Bangladesh has already adopted advanced Information and Communication Technology (ICT) to be digitised in all spheres of its functions. The government has already introduced e-commerce, e-banking, automated clearing house etc. Things are really a historic move towards achieving higher productivity across all economic sectors including agriculture and small and medium-sized enterprises through use of ICT.

Under the visionary leadership Prime Minister Sheikh Hasina, the country’s first ever communication satellite, Bangabandhu-1, was successfully launched into space. The first major benefit Bangladesh will get is meteorological forecast. Bangladesh will get more accurate data and images through this satellite. It will help Bangladesh in disaster management and preparedness.

Assailants have made attempts on Sheikh Hasina's life at least 19 times since the killing of Bangabandhu. She has survived at least 19 attempts on her life, the worst being on August 21 in 2004, when grenades thrown by unidentified assailants tore through an Awami League rally. But there is no alternative to Sheikh Hasina for the development of Bangladesh. She has been honoured as a leader of humanity after giving shelter to the Rohingyas. The five-point recommendations proposed by Prime Minister Sheikh Hasina during her address in the General Assembly of the United Nation have already been praised by the world community. Sheikh Hasina proved herself that she is the light house of the world humanity by providing shelter to the Rohingyas who fled from Rakhine state of Myanmar to Bangladesh due to persecution.

Awami League formed government for a third consecutive term. This term ensuring good governance is the key challenge for the government. The country is moving forward. Development activities are in progress and standard of living is also improving. The people of Bangladesh went to the polls to give Sheikh Hasina a third consecutive term ignoring the campaign of misinformation and lies.