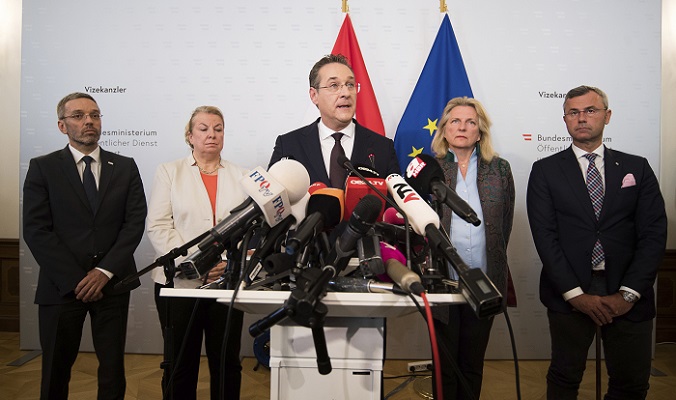 All ministers from Austria's far-right Freedom Party (FPÖ) have resigned, throwing the government into chaos.

The Freedom Party's leader Heinz-Christian Strache, who was also vice-chancellor, was forced to resign at the weekend after a video sting.

The FPÖ threatened a mass resignation earlier on Monday if Interior Minister Herbert Kickl was also forced out.

Chancellor Sebastian Kurz had called over the weekend for Kickl to be sacked, saying that as general secretary of the party he should take responsibility for the scandal.

The scandal broke on Friday when footage from 2017 was published in German media, showing Strache and another FPÖ official proposing to offer government contracts to a supposed Russian oligarch's niece.

Strache resigned the next day and Kurz - the head of the centre-right People's Party (ÖVP) - said new elections would have to be held.

The resigned FPÖ ministers include the foreign minister and ministers for defence, transport, and social affairs. The FPÖ made up half of the country's cabinet.

The video scandal comes at a particularly awkward time for the party. Voters across the EU go to the polls on 23-26 May, in European Parliament elections widely expected to boost the numbers of far-right and other Eurosceptic MEPs.

Before the scandal broke, the FPÖ was expected to score about 20% in the European elections.

How did the scandal unfold?

It is not known who recorded the video published on Friday. Neither is it clear who set up the meeting, which allegedly took place at a villa on the Spanish island of Ibiza in July 2017 - before the FPÖ joined the new government.

The video shows Strache and Johann Gudenus - another FPÖ politician - relaxing on sofas, drinking and talking to a woman who claims to be a wealthy Russian national looking to invest in Austria.

In the footage, the woman offers to buy a 50% stake in Austria's Kronen Zeitung newspaper and switch its editorial position to support the Freedom Party.

In exchange, Strache said he could award her public contracts, explaining that he wanted to "build a media landscape like [Viktor] Orban", a reference to Hungary's prime minister, described by critics as an authoritarian leader.

"If you take over the Kronen Zeitung three weeks before the election and get us into first place, then we can talk about everything," Strache said.

Strache also named several journalists who would have to be "pushed" from the newspaper, and five other "new people whom we will build up".

As part of the deal, he suggested the Russian woman "set up a company like Strabag", the Austrian construction firm. "All the government orders that Strabag gets now, [you] would get," he continues.

Austrian President Alexander van der Bellen called for early elections to be held in September. Chancellor Kurz said his party was "shocked" by Strache's behaviour, which he called "a wrong approach to politics".

The scandal had damaged Austria's international reputation, Kurz said, demanding a full investigation, saying the video might have criminal ramifications. "Anything illegal must be clarified," he said.

On Saturday Kurz said this was not the first time he had had difficulties with the FPÖ.

"Even if I didn't express myself publicly at the time, there were many situations that I found difficult to swallow," he said. "After yesterday's video, I must say quite honestly: Enough is enough."

Kurz is now facing a vote of no-confidence is his leadership, scheduled for Wednesday.

EU Commission spokesman Margaritis Schinas said the EU had "followed in disbelief as a leader of a political party was seen negotiating access to media and institutions, in exchange for funds from external benefactors who clearly do not have Europeans' best interests at heart".

Russia has denied any involvement. "This is an incident that has not, and could not, have anything to do with us," said President Vladimir Putin's spokesman, Dmitry Peskov.

In 2016, the FPÖ signed a long-term co-operation agreement with Putin's United Russia party, including joint efforts to "instil a patriotic spirit in the younger generation".