Militants have no religion, no country and border: PM 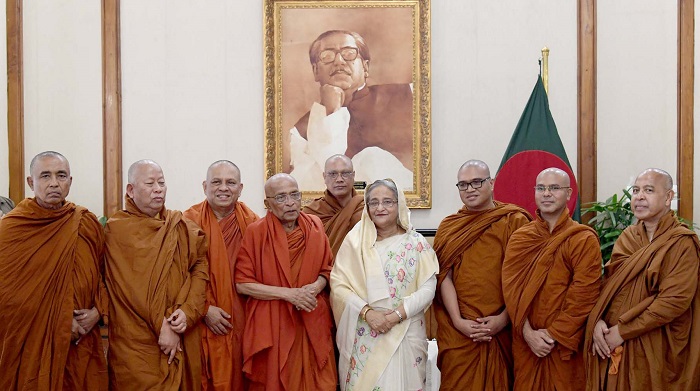 Describing terrorism and militancy as global problems, the premier said, “The people who are involved in militancy are just militants and they have no religion, no country and border.”

She mentioned the country is now free from hunger, and said “We are currently working to free the country from poverty undertaking various initiatives. The poverty rate has reduced to 21 percent while the rate of ultra poor is 11 percent.”

Terrorism and militancy are one of the major briars to achieve economic development, Hasina said.

Sheikh Hasina made this observation when leaders of the Buddhist community greeted her on the occasion of Buddha Purnima at her official residence Ganabhaban in the capital.

She mentioned that Bangladesh has set a clear example of giving equal opportunity to the people of all religions so that none can feel neglected.

“We are concerned enough to ensure that none of any religion feels neglected, and Bangladesh has set an example in the world to this end,” Sheikh Hasina told.

She mentioned that it is the duty of a state to ensure that all the people can observe their respective religions in a peaceful manner.

Describing Bangladesh as a country of religious harmony, the Prime Minister said that people of Bangladesh will perform their religious rituals with dignity and sincerity.

“This tolerance and brotherhood will prevail everywhere, and that is our aim,” she continued.