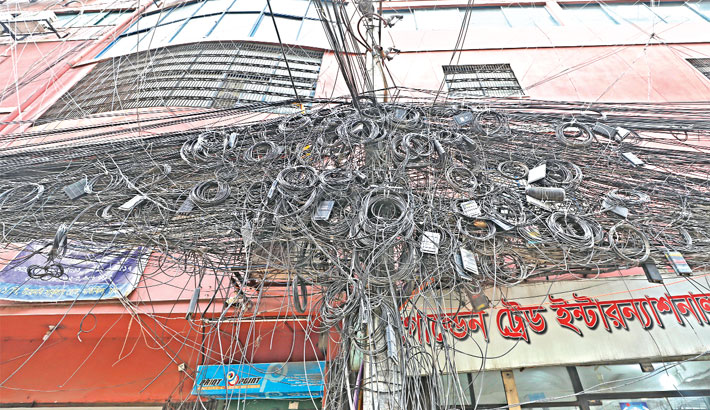 An electricity pole adjoining a high-rise building has remained covered with a jungle of overhead cables, posing a risk of accidents. The photo was taken from Toyenbee circular road at Fakirapool in the city on Monday. — Kamrul Islam Ratan

Overhead cables of internet and satellite televisionconnections lie entangled with many electricity and street lamp poles in Dhaka city, posing a risk of fire incidents.

Cable TV operators and internet service providers are illegally using the electricity poles and street lamp posts to give  connections to households and offices.

There are 1,464 licensed cable and 1,886 feed network operators in the country, according to Bangladesh Television, the licence providing authority of the network.

Wishing not to be named, a cable operator from Khilgaon said they pay a monthly amount of money to Dhaka Power Distribution Company (DPDC) Ltd to give cable connection through eletricity  poles.

He said the cables are damaging the electric wires.

DPDC officials said they signed a contract on December 7, 2018, with an Australian firm to conduct a feasibility study in the area under its jurisdiction to replace overhead power cables with underground ones.

As per the deal, the firm EnergyTron will do the job at a contract value of Tk 22.54 crore within the next one year.

During a recent visit, the electric poles on Banasree Bazar Road at Purba Rampura have been found tangled with TV cables.

Mashuk Sabbir, a staff at a shop in the area, told the Daily Sun on Thursday that there has been a fire incident in one of those electric poles due to a transmitter blast.

“The fire spread rapidly as there were lots of cables running through the poles. But fortunately, the fire could be doused rapidly,” he said.

Not only in Purba Rampura, electric and lamp poles in many parts of the city are tangled with cables.

“No other country in the world has such a mess of overhead cables. Other countries use underground cabling,” said Debashis Bardhan, Deputy Director of Fire Service and Civil Defence in Dhaka Division.

S M Haroon-or-Rashid, director general of Bangladesh Television, thinks that the Direct-To-Home (DTH) may be a way out of the overhead TV cable hazards.

“If the pace of overhead cable connection continues, the piles of wire will be everywhere,” he said.