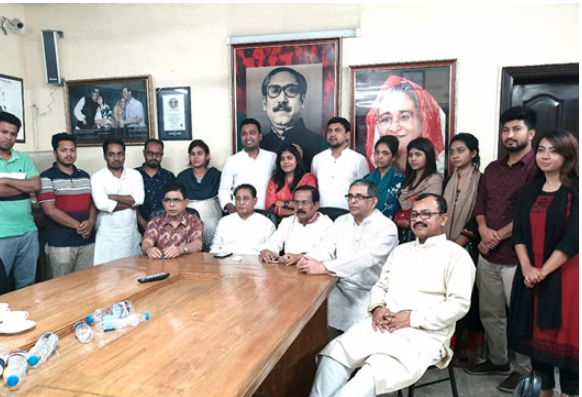 Dissidents of Bangladesh Chhatra League (BCL) who failed to get expected posts in the newly announced central committee suspended their protests after senior leaders of Awami League assured them of taking corrective measures.

The agitated BCL leaders withdrew their sit-in program at Raju memorial sculpture on Dhaka University campus at around 1.00 am on Monday after a meeting at the political office of Awami League President at Dhanmondi where representatives of the factions and the BCL central leaders held a meeting with Awami League’s four senior leaders.

“Awami League leaders assured us of a fair investigation and decision about the attack on us at the Madhur Canteen and TSC after the announcement of BCL committee. The posts of controversial leaders would be declared vacant and those posts would be filled up with qualified persons, president of Ruqayyah Hall unit of Chhatra League, B M Lipi Akhter said.

BCL President Rezwanul Haque Chowdhury Shovon said that there must be a practice in politics.

“We shouldn’t destroy the reputation of Chhatra League. We will have to work for the party and country without any greed of getting higher position in the party. Chhatra League will always be united,” Shovon told BSS.

On May 13, BCL announced a 301 member full-fledged central committee. After the publication of the committee, around hundred deprived leaders staged demonstration on the Dhaka University campus, protesting the inclusion of certain “controversial” persons in the central committee.

At least 20 BCL activists were hurt in an attack at Madhur Canteen on May 13 and they also came under fresh attack on May 19. Protesting the assault they started a sit-in, early Sunday at the base of Raju memorial sculpture.