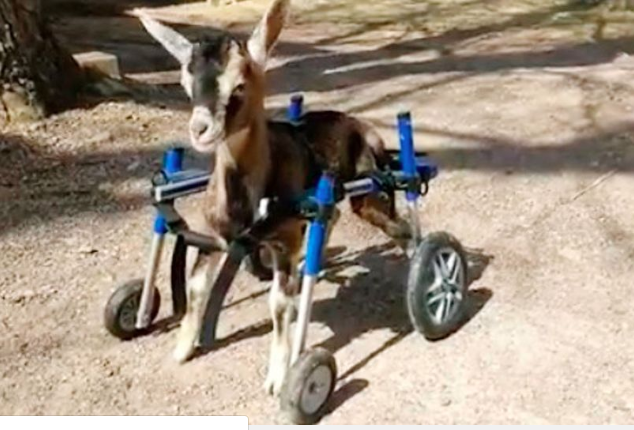 Four years ago, Leanne Lauricella had a high-flying job in the city but hated the gruelling commute to and from work.

But now she's given up her career to look after goats with special needs in the countryside.

"I often asked myself, 'Is this what life is?' I was feeling completely unfulfilled and I knew there had to be something more," she said.

Before she gave up working in New York, she would spend her evenings looking after animals and began to expand the farm that was growing in her back garden in New Jersey.

Leanne posts pictures of the adorable farm animals on her Instagram account Goats of Anarchy and has amassed over 600,000 followers.

She said: "I decided to trade in the high heels for muck boots and my Mercedes for a classic Chevy pickup...

"Some people have called me foolish or irresponsible for quitting my job without a plan, but for me, it was a leap of faith."

Leanne's husband also quit his job on Wall Street, where he'd worked for 25 years, so that he could spend his time restoring classic Corvettes.

"He has never been happier because he was doing what he loved. I wanted the same for myself," she added.

The sanctuary also helps other animals, like Merlin the White Pekin duck.

He was born with a disability that left him unable to walk, but the charity sourced him a special wheelchair that's given him back his independence.

"Once he was all rigged up, it was truly amazing. It's not every day you get to see animals take their first steps.”

Because the goats stay at the sanctuary after they're rehabilitated, it's getting crowded.

Now Leanne is at full capacity and is looking for a bigger space so she can help even more goats in need.

Writing on her gofundme page, she said: "At Goats of Anarchy, we rescue and rehabilitate goats with special needs including blindness, neurological disorders, congenital defects, frostbite, amputations, abuse, neglect and hospice care.

"After our goats are rehabilitated, they live out their full lives with us at the sanctuary.