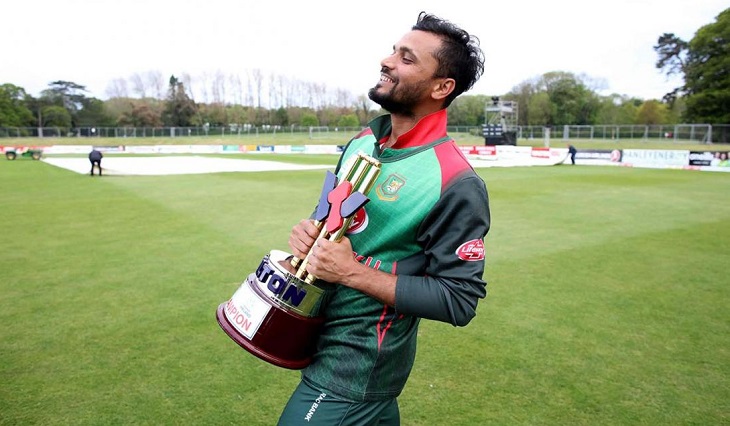 The five-wicket nail biting victory of the team Tigers in Dublin, Ireland, over West Indies in the tri-nation Cricket Championship trophy was a perfect tribute to Sheikh Hasina on her 38th homecoming day. No person in Bangladesh could have been happier than her to see the Tigers win the series seemingly facing some difficult odds, especially the rain. In a rain-swept match set to score 210 runs in 24 overs, not many cricket enthusiasts were hopeful in Bangladesh, exception perhaps was the Prime Minister.  Before the team left for Ireland as a routine, they went to meet the Prime Minister and seek her blessings. She said ‘play with confidence’ and that is what they did on Friday to clinch the trophy after losing in six previous finals. Fans have named Mash and his company as Robert Bruce of Cricket.

Many pundits will smell politics when Sheikh Hasina is brought into picture after the team Tiger’s win but even her strongest of critics must acknowledge the fact that no other Prime Minister in Bangladesh has shown so much of love for games, especially cricket and done so much for its improvement. Love for games and sports runs in her blood. Her father Bangabandhu Sheikh Mujibur Rahman played football in Kolkata,  her brother Sheikh Kamal established Abahani Krira Chakra, Sheikh Jamal loved both cricket and football in his school days and Sheikh Kamal’s wife Sultana Kamal was an athlete of national repute.

Politics was never far away from cricket. South Africa lost its international cricket playing status in 1970 as it would not allow any blacks to be included in its team. Only in 1991 when their apartheid policy in cricket was abolished, they regained their status and played the first ODI and Test against India in December of 1991. During Pakistan days the lone person who got a berth in Pakistan test cricket team from the then East Pakistan was an Urdu speaking Latif from Dhaka. His position would always be the 12th man with the responsibility of carrying water and towel in the field during the break. That was our joy in the childhood.

The current Finance Minister A H M Mustafa Kamal, the then President of ICC was denied the privilege of handing over the trophy in the Final of the four nation tournament in Melbourne on 1 April 2015 as Mustafa Kamal protested against poor umpiring during the Bangladesh-India quarter final. There are allegations that ICC has become a three nation club of elites -England, Australia and India. Only three players from Bengal made it to the Indian national team so far – Pankaj Roy, Ambar Roy and Sourav Ganguly.

Bangladesh was first granted the test status in 2000 and the first inaugural test match was played against India in Dhaka. After it was given the test status the nation was in euphoria and again no one could have been happier than the then Prime Minister Sheikh Hasina. Once Mashrafe, the ODI captain, who has multiple injuries in his body, was asked what makes him still play cricket with so many injuries, his simple answer was “when our freedom fighters in 1971 could continue fighting after receiving sever injuries in battle fields why can’t I play a simple game of cricket?” No answer could have been more patriotic than this and in the last election he was given a party ticket to contest the national election from Narail, which he did and win. As usual after the Friday win the Prime Minister was the first one to call Mashrafe and congratulate him and the team for the stunning win.

Coming back to Friday final when the WI scored 152 for 1, the unkind rain came pouring over Dublin, compelling the game to stop. Even if the rain swept away the match still Bangladesh would have been declared winner as they headed the points table and earlier defeated WI twice in this tournament. As a matter of fact Bangladesh was the only undefeated team in this tournament.

One of my former students Siddique was praying that rain should not stop and the Tigers would be able lift the trophy by default. But seasoned players want to play and win, not by default. Siddique never played cricket but loves watching and is good in growing papaya. Once the game resumed Siddique was frustrated but kept his hopes high.

The team that lifted the trophy comprises of probable next World Cup players and few could be players. For the first time after many years Tigers played as a comprehensive team, everyone performing their best. Different combination of openers were tried and all performed well making the choice for the selectors a bit difficult for selecting the openers for the World Cup to be played in England and Wales from 30 May.

The bowlers as usual did not let down either the team or millions of their supporters. Besides lifting the three nation trophy the added advantage the Tigers got was the benefit of practising in a similar condition when they play the World Cup in few weeks, the first match being with South Africa to be played on 2 June at the Oval, a venue that has witnessed many cricket histories in the making.

It would be difficult to pick a single hero for the Friday win though the media and the fans would like to put Mosaddek and Soumya in the forefront.  With the departure of Tamim, Sabbir and Mushfiqur suddenly, the game became anybody’s game till both Soumya and Mosaddek’s bat began to flash like Damascus steel swords. Soumya scored a smashing 66 off just in 41 balls with nine fours and three sixes before being dismissed in the 12th over for 66. The fans at home yelled ‘yes we can win.’ When lower order batsman Sabbir was promoted to No. 3 he fell for zero to Reifer. Again the fans held their breath. Mushfiq and Mithun batted responsibly but again the game became a bit uncertain. My niece who likes to watch cricket suddenly left the room to pray. Well pray she did while Mosaddek and Mahmudullah kept on flashing their bat and sure enough as expected Mosaddek Hossain (52 not out) put the final nail in WI’s coffin to begin uprooting a wicket at his end as a token of victory before dashing towards the dressing room. The illusive victory finally came to Bangladesh Tigers and that too just before the beginning of the 12 World Cup. The victory has raised the hopes high and made the Prime Minister along with millions of supporters of the team Bangladesh proud. The nation will wait for the team to return and surely will get a big reception at Gonobhaban. They always do. Bravo Tigers.

The commentator is an analyst and a researcher.