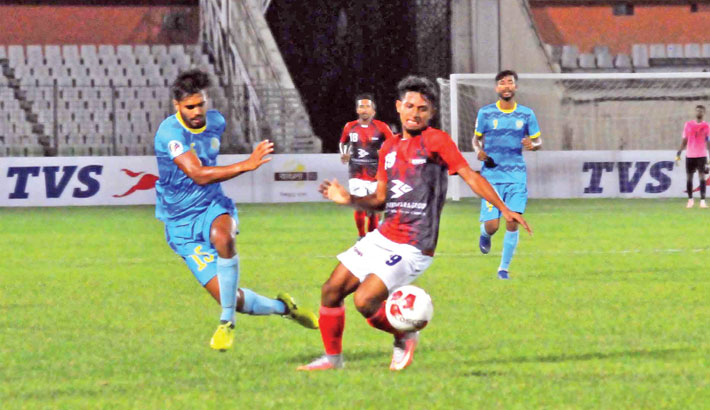 Bashundhara Kings continued to reign in the ongoing Bangladesh Premier League (BPL) 2018-2019 season as they yet again claimed a sensational triumph over their arch rivals Dhaka Abahani Ltd by 1–0 goals at Bangabandhu National Stadium in the capital.

Kings’ trusty forward Bakhtiyar Duyshobekov delivered on the day to hand Bashundhara Kings the magnificent triumph. With this win, Bashundhara Kings reinforced their spot at the top of the league table, pacing past Dhaka Abahani Ltd in the race for the title.

On the 31st minute of the match, Abahani had a golden opportunity to take the lead as their local forward Mamunul Islam took a nicely aimed free-kick but their Haitian recruit Kervens Belfort could not maneuver well enough to connect his header well enough to pierce Bashundhara Kings goalie Anisur Rahman Zico’s defences.

The match heated up over a foul by Abahani on the 38th minute. Referee decided to award a free-kick to Bashundhara Kings but Abahani foreign recruits Kervens Belfort started getting too aggressive with Bashundhara World Cupper Daniel Colindres. Both the sides deescalated the tension and made way for a free-kick.

Bashundhara Kings let the ball do all the talking as they took the control of the match by scoring a sensational goal with the free-kick courtesy of their Kyrgyz forward Bakhtiyar Duyshobekov scoring a brilliant goal from a free-kick.

Abahani’s desperation came on the forefront in the second half as their defender Raihan Hasan committed a horrific foul against Bashundhara Kings skipper Daniel Colindres on the 59th minute of the match as he futilely dragged Colindres to halt his sprint.

Bashundhara Kings missed an opportunity to double their lead on the 68th minute of play as their ace playmaker sprinted into Abahani’s box with a counter-attack. Coming in from the left wing, he sent a through pass to fellow midfielder Emon Babu stationed at the right edge of Abahani’s D-box. Emon sent a back pass to Sohel Rana who attempted to pierce Abahani’s nets but Abahani defenders with dexterity came down upon him and the pressure meant that Rana was not able to aim properly and the ball flew over the nets.

In the final minute of the match, Bashundhara Kings looked set for another goal but Colindres failed to connect his header to a cross.