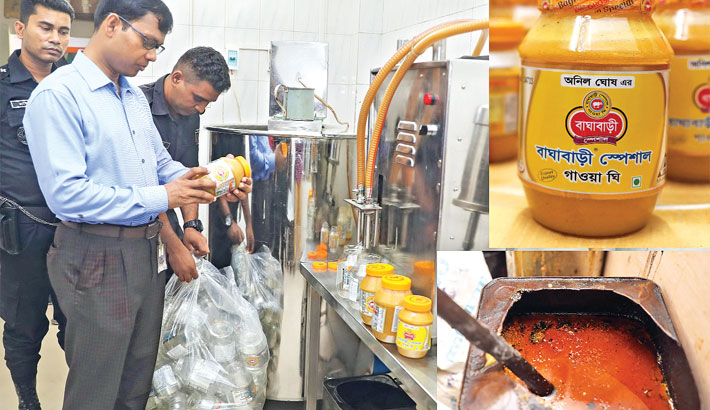 A mobile court run by Rapid Action Battalion and Bangladesh Standards and Testing Institution conducts a drive at the factory of Baghabari Special Ghee Company in the capital’s Goran area on Sunday. It fines the company Tk 10 lakh for selling substandard ghee and seals off the factory during the drive. – SUN PHOTO

Fifty-two substandard products of different companies are still selling in the market though the High Court has banned production and sale of those items.

They said the government authorities, particularly the Directorate of National Consumer Rights Protection (DNCRP), are fining the shop owners for selling those substandard products instead of creating pressure on the manufacturers to stop their production and sale.

Many retailers have urged the manufacturers to withdraw their substandard products from the markets. Many shopkeepers have expressed the fear of drives by the government authorities.

ACI Aydinjukta Laban, manufactured by ACI Salt Ltd at Rupganj in Narayanganj, is among the 52 banned products. It was found at Howlader Shop, Maa Babar Doa Shop and Karima General Store at East Badda in the city on Sunday.

One of the shop owners said that she was unaware of the banned products while two others said that the company did not take out the salt from their shops. Instead, the company men came to the market to supply the product to them.

“When we have asked the company men to withdraw their product, they have showed us a statement to sell their salt,” one of the shopkeepers said.

This correspondent has obtained a copy of the statement signed by ACI’s Business Director Kamrul Hasan on May 14.

“The BSTI found excessive pH in ACI Pure Salt bearing batch number no.0214304. Keeping respect to the BSTI, the authority took out the product from the market,” the statement said.

Through the statement, the company means that the harmful salt was withdrawn and what they are selling now is up to the standard.

Mollah Salt, manufactured by Mollah Salt Industries Ltd at Char Syedpur in Narayanganj, is one of the banned products.

Owner of Niloy Enterprise at a kitchen market along Gulshan Lake at Gudaraghat told the daily sun that the company men came to the shop and explained that the HC banned their Aydinjukta Laban, which is thick. Generally, thick salt is used in fish, but it not used for cooking food and also not taken with dishes.

A shopkeeper at the kitchen market showed two items of Pran and expressed fear if he would be fined for the product. He has urged the company to take out the products soon.

Some shop owners have said that only City Oil Mill took out its Teer Sarisha Tel (mustard oil) from them, but no other companies came to do so.

On May 12, the High Court ordered the authorities concerned to withdraw 52 products from the market found to be substandard in tests conducted by the BSTI.

It asked BSTI, BFSA, and DNCRP to take immediate action to remove these products from the market and stop their production until they meet mandatory BSTI standards.