Dhaka lights up for Eid, but at what cost? 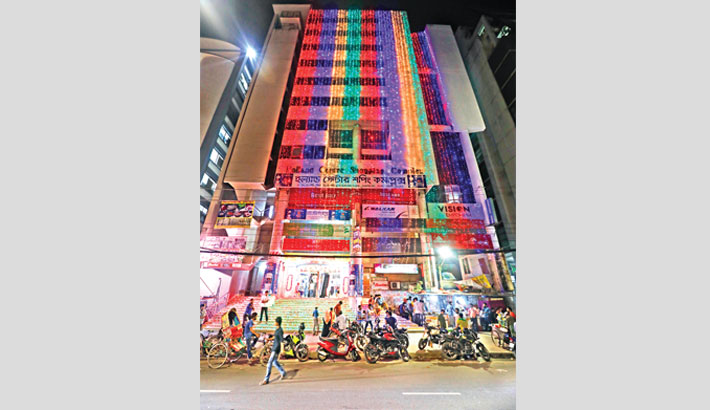 Multi-coloured bulbs lights up capital Dhaka as all the markets offer favourites in dresses and foods for the Eid-ul-Fitr shopping crowd, but at what cost?

At a time when the government was spending billions to ensure uninterrupted electricity to offices, markets and homes, the lightning of the building for over a month was a mockery with the tax payers.

As per approved rules markets are permitted to light up for seven days before all festivals, but the markets and food stores defy the rule by illuminating their buildings for more than a month.

Business sources said many of them do not even pay the charges for using electricity for their festival lights. They alleged this was done in connivance with corrupt men in the Dhaka Electric Supply Company Ltd. or the Power Development Board.

In capital Dhaka, home to about 19 million people, residents have now forgotten the “black outs” of at least 20 hours of the day during 2001-2006 under the rule of current opposition Bangladesh Nationalist Party (BNP).

Prime Minister Sheikh Hasina made urgent arrangements to give relief to the people of Dhaka and other places soon after coming to power in 2008 elections.

Residents of Mirpur and Badda areas told the Daily Sun that there is practically no power cuts and they do not want to recall the days when they had practically no electricity supply the whole days. “We remember that there was no supply for more than 20 hours daily …. Thank God it has dramatically changed,” Taher Hossain, a resident of Badda area, told the Daily Sun.

The utility electricity sector in Bangladesh has one national grid with an installed capacity of 16,525 MW as of 13 September 2018. The total installed capacity is 20,000 MW (combining solar power). Bangladesh’s energy sector is booming. Recently Bangladesh started construction of the 2.4-gigawatt (GW) Rooppur Nuclear Power Plant expected to go into operation in 2023.[2] According to the Bangladesh Power Development Board in July 2018, 90 percent of the population had access to electricity. However per capita energy consumption in Bangladesh is considered low.[3]

Bangladesh plans to set up the 2,400 MW power plant, the Ruppur Nuclear Power Plant at Rooppur, Pabna district, 200 km (120 mi) northwest of the capital Dhaka, by 2018. Planned to go into operation by 2023, it will be the country’s first nuclear power plant.

Currently electricity is also being brought also from neighbouring India.

Thus, many feel, the market leaders should help the government in saving electricity by reducing the hours of lightning and also the number of days as specified in the official rules.