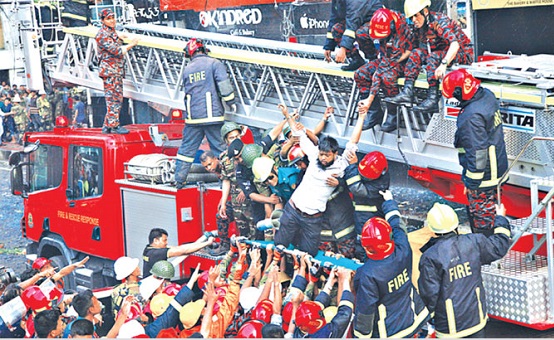 Humans are born to eventually die; every person will have to taste death. But it does not have to be abnormal death. A person has the right to die naturally. But normal death has now become a challenge. There have been many incidents around us which makes us insecure. Our life is really very unsafe.

In Bangladesh, people are facing extensive fire incidents in present situation. According to the world health ranking, Bangladesh has the 107 fire risk ranking position and death rate 1.32. Fire Service and Civil Defense statistics showed that around 250,000 fires occurred in the country between January 1, 1997 and December 31, 2018. At least 1,970 people were killed in around 200,000 fires across the country between 2004 and 2018, according to fire service data.

The problem is increasing day by day due to some misunderstanding and unconsciousness of House Builders, Land Owners, Fire Service, RAJUK and Operators. Most of the buildings lack adequate fire safety systems. There are insufficient amount of fire extinguishers, fire alarms, fire detectors, smoke detectors, sprinklers and insufficient water source, proper evacuation plan, while there is no arrangement for people to take shelter in a safe place during fire hazard. The entire building should be engaged in the evacuation plan, safety measure and refuge area and also arrange a fire drill once in a year.

According to Fire Prevention Act 2003, before the construction of any multi-storied building, the owner or authority must take fire safety measures and submit the report to the Director General within six months; otherwise the Director General can declare the building as unusable. But the exact implementation of law can not be seen anywhere properly.

During a fire hazard there are so many barriers that create obstacle to inhibition of fire prevention. Among them the eager people create the most obstacles to the fire service vehicles. They reach the spot late only because of this eager crowd. According to Fire Prevention Act 2003; the fire brigade can remove anything or any people that bar its work during operation.

We know the limitations of our Fire Service and Civil Defense. They don’t have enough capacity to fight against fire. But what they have, they cannot apply properly for crowded vicinity. Crowd management is not the responsibility of a fire service staff at an emerging situation. This responsibility is entirely entrusted to the defense personnel of Police, Ansar, Army and other trained forces.

In developed countries, it can be seen that police creates a barrier around the place of an incident and none can enter this barrier. However, this is not seen in Bangladesh. They need organised and systematic plan and constant communication between staffs to tackle the situation.

OSHA (Occupational Health and safety Administration) recommends some elements that help to manage the crowd;

Set up barricades or rope lines and ensure that barricade lines have an adequate number of breaks and turns at regular intervals.

Hire additional staff as needed and have trained security or crowd management personnel or police officers on site.

Address potential dangers, including overcrowding, crowd crushing, being struck by the crowd, violent acts and fire and take steps to overcome this.

Provide a separate entrance for staff. Provide door monitors to prevent crowd entry. Make sure that all employees and crowd control personnel are aware that the doors are about to open.

Staff to guard entrances with uniformed guards, police or other authorised personnel.

Use a public address system to manage the crowd and to communicate information or problems.

Do not restrict egress (a systematic well planned evacuation system that provides safe evacuation from the incident place to assembly or safer place), block or lock exit doors.

Know in advance who to call for emergency medical.

On the other hand volunteer networking is just as important. There are a huge number of national, local, international volunteer organisations inside Bangladesh and a huge number of volunteers get training from various organisations.  Government should create a database of volunteers for good networking. An application has to be developed, by which they will be connected in the same network and they can be integrated when needed and make sure the voluntary work is not confined to the certificate only.

In case any emergency volunteer should come first and cooperate with the fire fighter. The entire volunteer has their own visible card. They just show it to the authority and get access into the spot. Volunteer should create the emergency route for ambulance; give the necessary emergency and mental support to the victim and so on.

If each and every one of us are aware of our own responsibility, then it can be possible to overcome any casualty. We should remember that every soul has a great value.