Homage to people of India 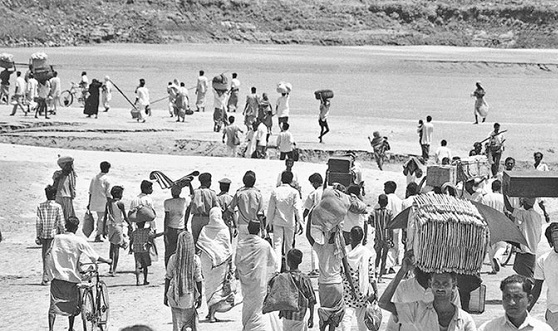 India and Bangladesh are two states whose embryonic cords are only separated by physical border demarcation in the last 75 years. But deep down the camaraderie and feeling for each other in public level is one of the best for any two neighbouring countries in the world. This was proven during the tumultuous days of Bangladesh Liberation War in 1971.

Here I am talking about my personal experience during the 1971 war when we had no choice but to pour through the borders of Indian state of Tripura to save our lives from the brutal onslaught of the barbaric Pakistan army. My family like 10 million others had to seek refuge in India to avoid the Holocaust perpetrated by the Pakistani military junta.

We had to abandon our home on the 17th April, ’71 and tried to hide in the midst of villages to avoid detection being a family of freedom fighters. Our father had by then already crossed the border to India after his revolt against the military regimes crack down on 25 March.

My family was seen as the sore thumb amongst the village folks. We were so exposed as the most conspicuous targets for the killers who were rounding up pro-liberation families to annihilate the freedom movement once for all. The villagers were ever so good hosts to give shelter, yet they were very sceptical of us living in their village fearing that for us their village will be attacked and burned, people will be killed and women and girls will be violated. This left us with no other alternative but to flee the country.

The great exodus of my life started then and the story thereafter till 16 December is a story no less than that of a minor episode of Homer’s Iliad. After a long walk through the paddy fields in the middle of a storm with my two younger brothers aged nine and six, my sister aged 15, my mother, myself a 10-year-old along with my 17 year old brother as the head navigator and guide we ventured out to the unknown.

No road direction, only to walk east to reach the border. Amid the pricking rain drops walking in the aisles of muddy, slushy, waterlogged arable landscape with mammoth cracking sounds of a thunderstorm was the most fearful journey I have ever endured in my life. The barren lands, no human being in the vicinity; the population were so scared that there was no movement of people anywhere; the whole Bengali population was entrenched within the four walls of their dwellings except the patrolling of the military on their vehicles, there was this air of fear of death that had engulfed my thoughts. The hunger, the dried-up throats and the rain made the whole exodus a most vivid of all my memories till today. Never feared for life ever so much! Made me wonder why people of the same religion are killing us.

Finally, after a non-stop 14 hours of walking we poured into the Indian State of Tripura and camped outside the border pillar for the night under a tree. Next morning, we ventured into the safe haven; a breath of fresh air inhaled after a long gruelling fearful 16 days of homelessness and destitution.

A new episode of our life started as refugees. However, it was worth the long walk, the people of India embraced us with their open arms; they immediately gave us shelter, brought hot food. Cleared one of their room for us to live, brought us change of clothes, the people of the village all rallied around us to club together to bring utensils, money to buy some useful things to start our new life. It was one of the most benevolent of acts someone has ever done to us in our life.

The Hindus, Muslims and Buddhist people of Tripura all joined in unison to make us welcome into their village. At the time I just came to realise that, humanity triumphs over everything.  No wonder I am ever so grateful to the people of India.