Drug smuggling goes on despite drive 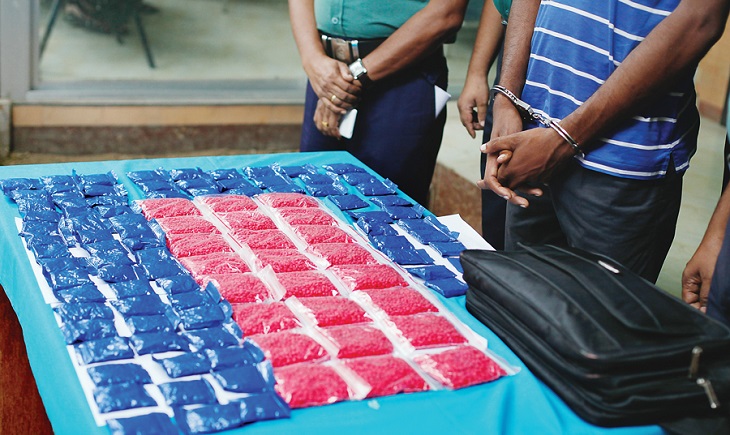 Despite the massive crackdown against narcotics and crossfire by law enforcers, smuggling of illegal drugs like yaba into the country from the neighbouring Myanmar is still rampant.

Evading the eyes of law enforcers, including Border guard Bangladesh (BGB) and Coast guards, consignment of such yaba slips into the country from Myanmar through different bordering points of Cox’s bazaar on a regular basis.

Smuggling of such yaba is still going on as over 3,000 listed drug traffickers remain still at large, detective sources said.

A total of 102 listed drug smugglers including 16 who are the relatives of ex-lawmaker Abdur Rahman Bodi surrendered before the authorities recently.

But more than 1,000 such listed drug smugglers based in Teknaf in Cox’s Bazaar are still at large.

Of the listed yaba traders by police, 1,151 are based in Cox’s Bazar. Of them, 73 are identified as ‘top yaba bosses’.

Along with the listed drug smugglers, around 50 unscrupulous policemen were also involved in yaba dealings, police sources said.

An Assistant Inspector General (AIG) (media) at Police headquarters Sohel Rana said, “Without surrendering before police, the yaba smugglers are working behind the scene.”

If they are not brought to book, smuggling of such yaba will not stop at all, he added.

Only field-level drug carriers with drug items including yaba are being caught by law enforcers at times, but in most of the cases, their godfathers in collusion with a section of dishonest policemen are remaining almost behind the scene, detective sources said.

In the wake of the countrywide massive anti-narcotics crackdown by law enforcers, such dreaded drug smugglers of Cox’s Bazaar and elsewhere in the country went into hiding.

At least 51 yaba smugglers have been killed in ‘shootouts’ with law enforcers and internal conflicts in Cox’s Bazar since the start of the anti-narcotics crackdown by law-enforcement agencies on May first week last year.

RAB Deputy Director (media) major Raisul Azam said a number of drug traders are regularly being arrested with drug items from different parts of the country.

They are also being awarded various terms of imprisonment on charges of carrying drug.

But most of them again get involved in the same business after coming out of jail on bail, he added.

A countrywide anti-drug drive was announced on 4 May 2018, but the operation was actually launched on 15 May.

A total of 358 drug traders were killed in the drives till 14 May this year.

Among them, 169 were killed in gunfights with police while 106 with RAB (Rapid Action Battalion) and 12 with BGB (Border Guard Bangladesh).

Meanwhile, a suspected drug peddler was killed in a gunfight with BGB in Teknaf upazila of Cox’s Bazar on Wednesday night.

The deceased was identified as Siraj Mia, son of Fozol Ahmed, said a local.

Sensing the presence of law enforcers, some drug peddlers opened gunfire, forcing the lawmen to retaliate, he said.

After the gunfight, they searched the spot and recovered the bullet-hit body of Siraj along with two native guns and 50,000 yaba pills, the BGB official said.

The body of Siraj was sent to Cox’s Bazar Sadar Hospital for autopsy.

Two separate cases have been filed in this connection.

Around 3,000 traders, with 350 ‘godfathers’, control the illegal drug business across the country.

The huge number of narcotics traders is on the lists of various government forces. The lists are updated by the Home Ministry annually.