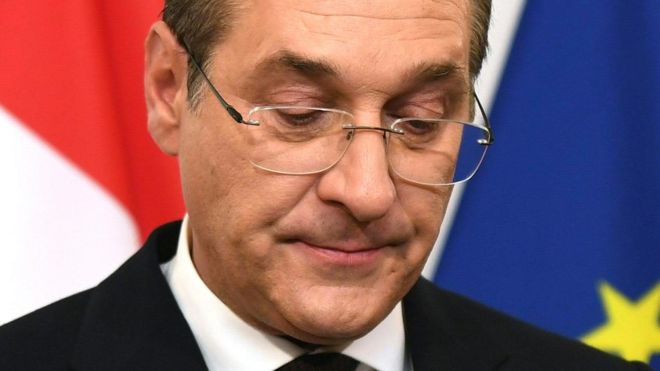 Austria's Vice-Chancellor Heinz-Christian Strache has resigned a day after secret video footage mired him in a corruption scandal.

The video appeared to show Mr Strache discussing government contracts with an alleged Russian investor in return for campaign support.

He also appeared to hint at a potentially illegal donation system for the far-right Freedom Party he leads.

Strache said that transport minister Norbert Hofer will replace him.

He said that his actions had been "stupid" and "irresponsible" and was leaving to avoid further damage to the government.

Strache claimed he was the "victim of a targeted political attack" that had used illegal means.

Austrian Chancellor Sebastian Kurz of the centre-right People's Party was also due to give a statement on Saturday.

The damaging video featuring Mr Strache was allegedly filmed on the Spanish island of Ibiza in 2017, just months before elections brought him to power.

It was published on Friday in a joint report by Der Spiegel and the daily Süddeutsche Zeitung. It is unclear who set up the meeting and who filmed it.

The footage shows Strache and Johann Gudenus - also a Freedom Party politician - talking to a woman who claimed to be the niece of a Russian oligarch. She told the pair that she was looking to invest in Austria.

Both politicians can be seen smoking and drinking while relaxing on sofas.

The woman offers to buy a 50% stake in Austria's Kronen-Zeitung newspaper and switch its editorial allegiance to the Freedom Party.

Strache names several journalists who would have to be "pushed" from the newspaper.

He also appears to suggest that she could be awarded public contracts.