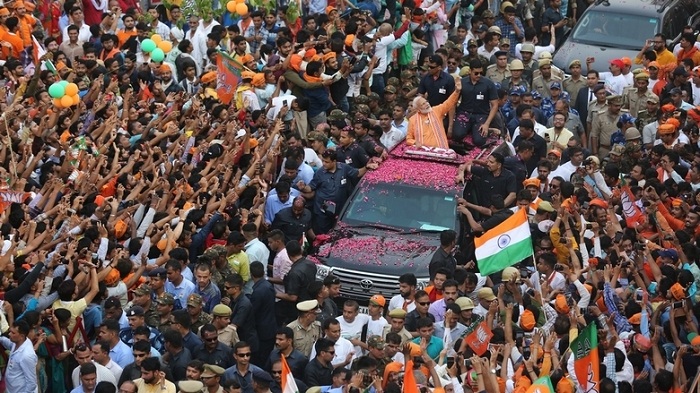 Millions of voters across 13 constituencies in Uttar Pradesh - India's most populous state with 80 Lok Sabha representatives - will be readying to go to polls in the seventh and the final phase of India's election on Sunda(May 19).

Only two seats - Robertsganj and Mirzapur - will see BJP, that's contesting in 78 seats in the state, represented by Apna Dal (Sonelal) with Pakauri Lal Kol and current Health and Family Welfare Minister of State (MoS) Anupriya Patel flying their flag against candidates from Congress and SP.

No seat however will be of as much prominence as Varanasi, the seat of India's sitting Prime Minister Narendra Modi who is seeking a second straight term as an MP from one of the world's longest continuous inhabited city. So much so that it puts other big names like state BJP president Mahendra Nath Pandey (Chandauli), Union Minister Manoj Sinha (Ghazipur) and former Congress MoS R.P.N. Singh (Kushi Nagar) in the backburner.

The BJP (and its ally Apna Dal) had won all the 13 seats in 2014 but just if people in and around Varanasi - where Khaleej Times has been reporting from - are to be believed, then a lot has changed in these five years. Some even point to the party's defeat in last year's by-election in Gorakhpur. The traditional 'home' of UP Chief Minister Yogi Adityanath remains a challenge this time too with SP's Ram Bhual Nishad and Madhusudan Tripathi of Congress expected to split votes while Manoj Sinha faces BSP candidate Afzal Ansari, who is the brother of mafia boss Mukhtar Ansari and is expected to ride high on SP-BSP voters.

Overall, the BJP is widely expected to climb down heavily from the 71 seats it won in UP in 2014 with SP-BSP certain to make inroads. The two parties together managed only five seats back then with BSP winning all five including Mainpuri and Kannauj, their traditional strongholds. Yet nothing will matter as much as how voters fare and the verdict they hand Modi in Varanasi where he barely faces any challenge this time despite many local residents unimpressed by his first five-year stint as a PM MP in Varanasi.

However, the BJP will be hoping to build on Modi's 2014 victory margin of close to 350,000 votes over Aam Admi Party's Arvind Kejriwal while the opposition in the form of Congress's local strongman and five-time MLA Ajay Rai and SP's Shalini Yadav will be fighting to split votes and cut down on the margin.

And such is the hostility taking shape,that just two days before the final day's polling on Sunday, BSP president Mayawati alleged that Prime Minister Narendra Modi's men were bribing and threatening voters in Varanasi. In a tweet, the former UP CM claimed that "outsiders" were camping in Varanasi and luring and threatening people to vote for PM Modi, something Khaleej Times independently attempted to investigate but couldn't immediately verify.

"How can free and fair elections be held in Varanasi if efforts are being made to ensure Prime Minister Narendra Modi's victory? The voters are being first lured and then threatened. Why is the Election Commission not keeping an eye here like it is doing in West Bengal? (sic)" she said.

As many as 59 parliamentary constituencies - all 13 seats in Punjab, as many seats in Uttar Pradesh, nine in West Bengal, eight seats each in Bihar and Madhya Pradesh, four in Himachal Pradesh, three in Jharkhand and the lone seat Chandigarh - will go to polls on Sunday in the seventh and final phase of the Lok Sabha elections.