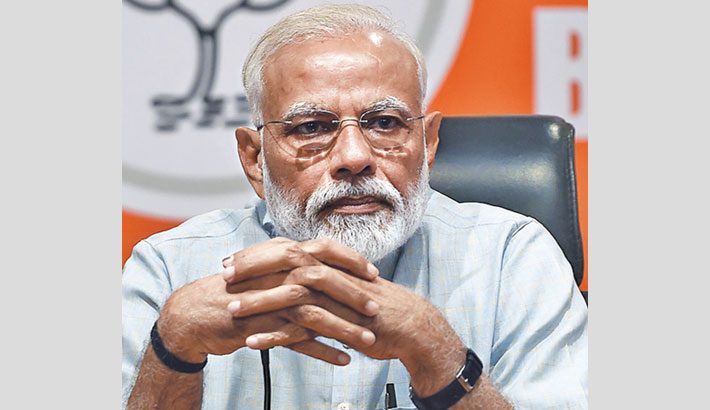 The conservative prime minister was forced to act as a backlash grew over comments by Pragya Singh Thakur, already dogged by a criminal case over a 2008 bomb attack, ahead of Sunday’s final round of India’s marathon election.

Thakur later issued an apology for her statement that Gandhi’s assassin Nathuram Godse “was, is, and will remain a patriot”.

But it failed to douse the controversy, and the Hindu nationalist Bharatiya Janata Party said it has launched an inquiry into Thakur.

“Any comments and or statements made on Gandhi or Godse are absolutely wrong. Such language and thoughts should be condemned and are unacceptable in a civilised society,” Modi said in a television interview.

“People with such beliefs must think one hundred times before saying such things.

“She apologised publicly for the comments, but I won’t forgive her at a personal level,” Modi told the News 24 channel.

Gandhi was shot three times in January 1948 by Godse, a Hindu fanatic angered by what he considered Gandhi’s pandering to Muslims and by India’s partition after independence in 1947.

The BJP astounded many last month when it named Thakur as its parliamentary candidate in the Madhya Pradesh state capital of Bhopal.

Critics accused the party of using Thakur to polarise voters on religious lines.

Thakur was arrested shortly after a bomb blast near a mosque in Melegaon, Maharashtra state, in 2008 that killed six people and injured 100. One charge against her has been dropped, but Thakur is still on bail waiting for another charge to be heard.

Thakur said she had only given her “personal opinion” about Gandhi. “My intention was not to hurt anyone’s sentiments. If I’ve hurt anyone, I do apologise. What Gandhi has done for the country cannot be forgotten,” she said.

The opposition Congress party, which Gandhi once led, called on Modi to expel Thakur from the BJP.

“Remove terror accused Pragya Thakur from your party. Her statements have not only brought disgrace but also hurt the sentiments of people in India and across the world,” said a party statement on Twitter.