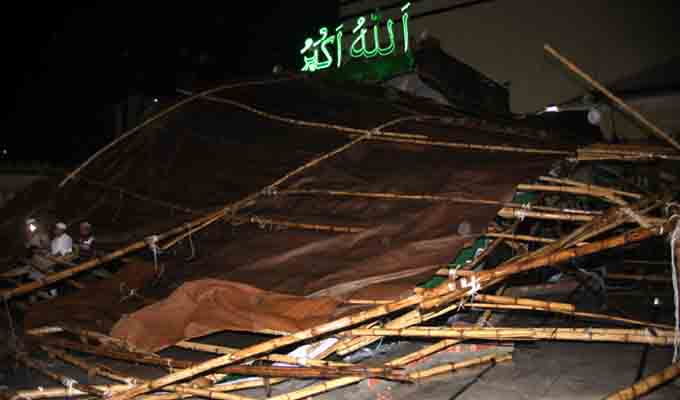 At least nine people were died and over 30 injured in Dhaka, Chapainawabganj and Naogaon district in a sudden nor’wester and thunder strikes on Friday evening.

Among nine, four were died in the capital Dhaka while lightning left four people dead—two in Chapainawabganj and two in Naogaon and another person was died in nor’wester in Rajshahi.

In the capital, a man was died and 22 others injured after the storm broke down a makeshift bamboo-canvas shade at Baitul Mukarram around 6:45pm, when people were offering their Maghrib prayer after Iftar.

Bachchu Mia, inspector of Dhaka Medical College and Hospital, said the deceased had been identified as Shafikul Islam, 40. The injured were undergoing treatment in the hospital.

Some wounded said the storm began suddenly and broke the tent at South gate that fell on the devotees.

Being informed the firefighters rushed to the spot. They were conducting rescue operation, said Rasel Shikder, on duty officer at Fire Service Control Room.

In another incident in the capital, three people were reportedly died at Uttar Badda in the city after a wall collapsed on them during the storm.

The identities of the deceased could not be confirmed immediately.

Meanwhile, two flights of US Bangla Airlines made emergency landing at Chattogram Shah Amanat Airport for the storm.

Metrological Office said the nor’wester swept in the capital at a speed of 65 km at 7:02pm, but the speed was 93km at airport area at 7:05pm.

In Chapainawabganj, the thunder strikes during the storm killed two persons at Shrirampur in Baliadanga in Sadar Upazila around 4:00pm.

In Naogaon, two farmers were killed by thunder strikes at Ganuair village in Porsha Upazila around 4:30pm.

In Rajshahi, the storm killed one Abdus Sobhan Sarker, 80, after a tree fell on him.