Vicky Kaushal is India’s most desirable man of 2018 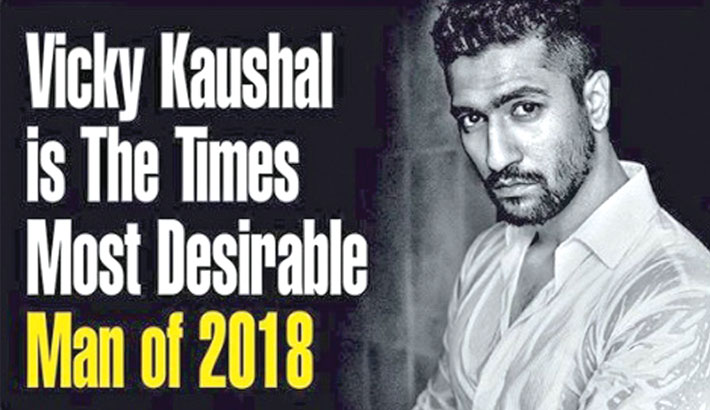 Actor Vicky Kaushal has been voted the most desirable man of 2018 by a media organisation. The actor, who is currently in the USA enjoying a break from work, shared a newspaper click on Instagram about it.

Sharing the picture, he wrote: “Never could have seen this coming. Thank you everyone.” Vicky has had a successful streak in Bollywood in 2018. Starting the year with Love Per Square Foot, a Netflix short film, Vicky was an instant hit as an urban youngster, much in love, and struggling to find a house in a big city. He followed it with Raazi, a stupendous box office success. Though it was headlined by Alia Bhatt with Vicky appearing in a supporting role, his sincere performance in the Meghna Gulzar film got him several nods.

He followed it up with Netflix’s Lust Stories, an anthology where Vicky starred with Kiara Advani. Appearing in a supporting role as a well-meaning but conservative husband, Vicky again won appreciation. Later in the year came Sanju, where he was again seen in a supporting role as Ranbir Kapoor’s best buddy. His turn as a Gujarati was among the best moments in the film. He ended the year with Manmarziyaan, where he plays a part-time DJ with commitment issues. With his 2019 film Uri: The Surgical Strike, the actor has become a household name.

Actor Anil Kapoor said he could not wait to work with Vicky in Karan Johar’s Takht. “Happy Birthday Vicky. May you continue to give heart-winning and power-packed performances. Looking forward to working with you in ‘Takht’ soon. Have a great year ahead! Lots of love,” he wrote. Alia called him a “lovely human” and wished him a “super day” while his Manmarziyaan co-star Abhishek Bachchan tweeted: “To the brother...Happy birthday. Live it large”.

Vicky will next be seen in Shoojit Sircar’s Sardar Udham Singh and in a horror comedy opposite Bhumi Pednekar. He is also a part of a movie being directed by Aditya Dhar, apart from Karan Johar’s multi-starrer Takht.