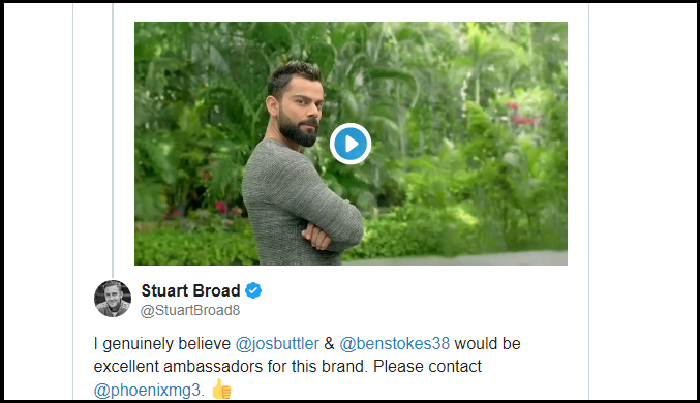 India captain Virat Kohli and youngster Rishabh Pant recently left their fans amused by debuting together for a television commercial. Kohli and Pant rapping together on the big screen took many by surprise. The two released the commercial for skin care company Himalaya Men on Thursday night. Within moments, the advertisement garnered more than 30,000 likes and 2000 retweets on the Indian captain's Twitter account in less than a day.

"Walking like a dude, feeling all cool," said Kohli as he starts the rap before adding: "You've got the look, you're going to rule."

Pant then replies by saying: "Paint the town red 'cos Virat says so'".

"me and @RishabPant777 team up with @HimalayaMEN to take care of the one problem that keeps coming back. PIMPLES! #HimalayaMenPimplesGottaGo #LookingGoodAndLovingIt," wrote Kohli on his Twitter handle.

The commercial has garnered mixed reactions from the fans as many have praised the chemistry between Kohli and Pant while quite a number of fans have made fun of it. And England star Stuart Broad is also one of the many who are not too impressed by the commercial. The veteran pacer, who is a popular figure on the social media, took a sly dig at Kohli and Pant for the commercial.

Broad took to Twitter to suggest the names of some better alternatives for Himalaya Drug Company to hire for its products. He tweeted the names of teammates Jos Buttler and Ben Stokes, writing,

"I genuinely believe @josbuttler & @benstokes38 would be excellent ambassadors for this brand. Please contact @phoenixmg3. ????"