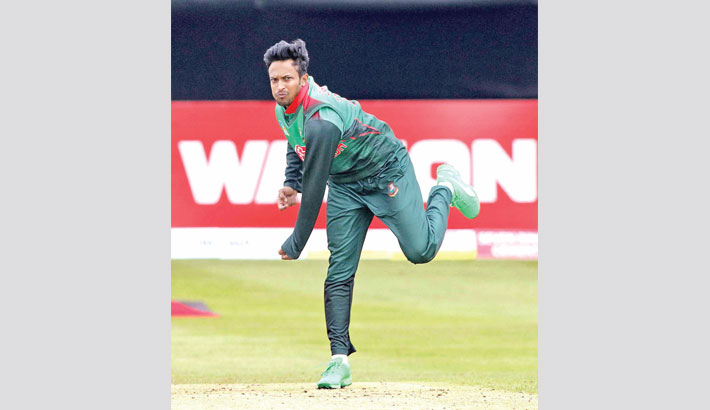 The Bangladesh Cricket Board (BCB) said on Thursday that they have given rest to Shakib Al Hasan to recover from the side strain that he sustained during their last match against Ireland on May 15.

Bangladesh will take on West Indies in the final of the tri-nation today.

“Shakib is resting on Thursday and will be checked by the team physio in the afternoon,” said Bangladesh Cricket Board media manager Rabeed Imam on Thursday when his attention was drawn regarding the update of Shakib’s injury.

Earlier, BCB chief selector Minhajul Abedin Nannu told daily sun after the match that there is no serious issue with Shakib Al Hasan despite the all-rounder retiring hurt in their last league match against Ireland.

According to Minhajul, Shakib will be kept under observation.

“We are just keeping him under observation,” said Minhajul.

“He did not sustain any serious injury as far as we are concerned. We did not want to take any risk with him so we opted to bring him back but we are confident that he will be fine soon,” he said.

Shakib left the field after sustaining strain on his left side while batting on 50. The all-rounder was seen taking a medicine offered by physio Thian Chandramohan after he seemed to have struggled while leaving the crease. His pain had recurred after he pulled a short ball off Joshua Little.

In a show of sheer domination, Bangladesh beat Ireland by six wickets to get a psychological boost ahead of their tri-series final against West Indies.

Shakib was earlier ruled out of the three-match ODI series against New Zealand and the following two Tests after sustaining a finger injury during the Bangladesh Premier League final. Shakib copped a blow from Thisara Perera while batting then, and it was later revealed that he had suffered a fracture.

Consequently, he was given the no-objection certificate to play in the ongoing Indian Premier League (IPL), but the all-rounder had featured in the only couple of games for the Sunrisers Hyderabad before joining the national camp.

According to reliable BCB sources, team management is considering to rest him in the final as they are not ready to take any risk with him ahead of the World Cup.