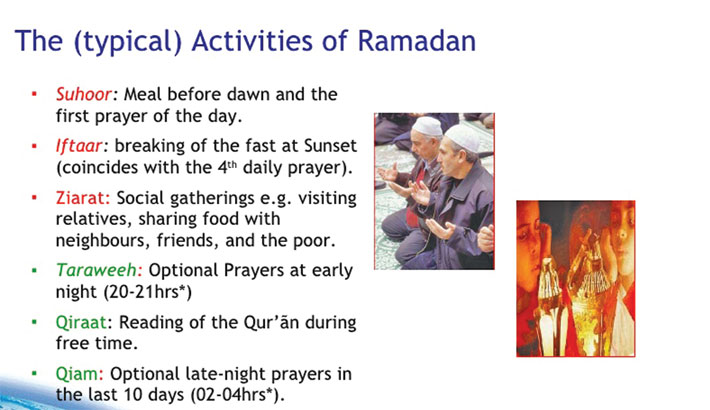 Ramadan is the 9th month of Arabic calendar which is the best one among others from various points of view. In this month, the Qur’an was revealed onto the last Prophet Muhammad (pbuh) to guide the mankind. (See: Surah al-Baqarah, 2:185). Therefore, it is considered as the month of Qur’an. Allah (swt) has made fasting obligatory for every Muslim who reaches to puberty and has not any shari’ah considerable reason(s) such as long traveling, sick, ministration for women etc. Hence, whoever gets this month is required to observe fasting. (See: Surah al-Baqarah, 2:183-187). Prophet Muhammad (pbuh) also describes the significance of this month in various ways. It is clearly stated in the hadith that “when Ramadan enters, the gates of Paradise are opened, the gates of Hellfire are closed and the devils are chained.” (Sahih al-Bukhari and Sahih Muslim). Moreover, Abu Hurayrah (Ra) reported that the Prophet (pbuh) said, “Whoever, observes fasts during the month of Ramadan out of sincere faith, and hoping to attain Allah’s rewards, then all his past sins will be forgiven.” (Al-Bukhari and Muslim). To attain those blessings, forgiveness and rewards, we must be seriously careful about the activities during this month. Few typical activities of Ramadan are as follows:

The term is wrongly used in our society as ‘sehri’. The correct term is ‘suhur’ as it has been stated in hadith. Derived from that word ‘suhur’, it can be said ‘sahri’ but not ‘sehri’. ‘Suhur’ is an Arabic word; meaning ‘mid-night meal’, ‘sahri’ refers to ‘my mid-night meal’. Terminologically, it means taking a meal before down and the first prayer of the day with an intention to observe fasting.

Breaking the fast at the end of the day; immediately after sun-set is a sunnah. The practice and command of our Prophet Muhammad (pbuh) is to have ifter immediately after sun-set as early as possible.  Ifter is very significant for a person who observes fasting. Allah’s Messenger (pbuh) said, “There are two occasions of joy for a fasting person: one when he breaks his fast, and the other when he meets his Lord, and the (bad) breath (of a fasting person) is better in the sight of Allah than the fragrance of musk.” (Al-Bukhari).

One of the significant activities practiced by our Prophet Muhammad (pbuh) is performing salat al-Tarabih (Trabih prayer) after ‘isha prayer during the month of Ramadan. It is really disheartening to observe the conflict between two about the number of raka’at of salat al-Tarabih. As it is not clearly stated the number of raka’at and was an ijmah among all Sahaba (Ra); the companions of Muhammad (pbuh) during the 2nd khalifa of Islam Umar Ibn al-Khattab (Ra) on praying twenty (20) raka’ats for salat al-Tarabih, we should follow that sincerely. It is recommended to perform nafal prayers as much as possible during Ramadan. Moreover, we should not fight each-other on how many rakat it consists of. It should be kept in our mind that fighting between two Muslims or Mu’mins is always haram and a  punishable action.

We should try to perform tahajjud prayers every night of the Ramadan. Prophet Muhammad (pbuh) said, “Whoever stands (in the voluntary night prayer of) Ramadan out of faith and in hope of reward, his previous sins will be forgiven.” (Al-Bukhari and Muslim).

As it is the month of Qur’an, we should involve ourselves in the recitation form the Qur’an and in its learning process. It was the first ayat of the Qur’an recommending us to read from it. (see: Surah al-‘Alaq, 96:1). Moreover, those who knows the Qur’an, should also try to teach others. Allah’s Messenger (pbuh) said, “The best of you is he who learnt the Holy Quran and taught it to others.” (Sahih al-Bukhari).

It is one kind of zakat and compensation for any unwanted, unwilling and unknown mistakes in fasting during Ramadan. It is recommended to pay sadaqatul fitr before ‘Eid al-Fitr prayers. One should keep in his/her mind that the amount for sadaqatul fitr is not same for all. It depends on his/her economic condition.

In conclusion, we can state that fasting serves as a shield from Hellfire. (See: Sunan An-Nasa’i) If we really want to be benefited from it, we must be careful about all activities of Ramadan according to the guidance of the Qur’an and Sunnah. May Allah help us to do that! Amin!

The writer is a scholar in Islamic studies and