Students Of 7 DU-Affiliated Colleges : Stuck In A Stalemate 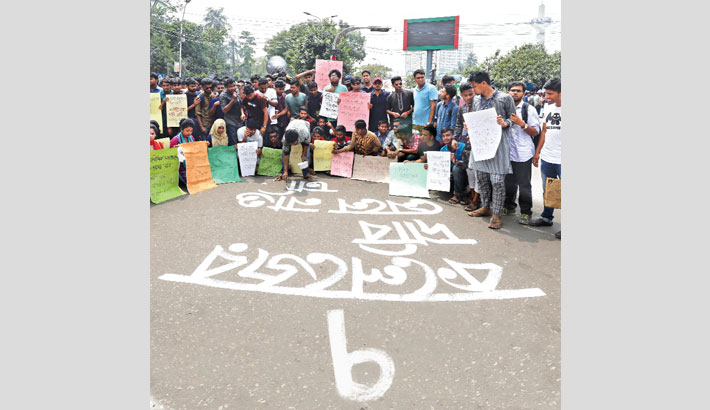 The nation can still remember Siddiqur Rahman, the third-year student of Political Science of Government Titumir College, who lost his eyesight forever when a policeman shot a teargas canister in close range on July 20, 2017, during a demonstration staged by the students of seven Dhaka University affiliated colleges. The luckless young man took to the streets along with his friends and other agitated students to press for a seven-point demand that included announcement of their exam schedules. Following the terrible incident Siddiqur was taken to Sankara Nethralaya in India’s Chennai where doctors conducted a surgery to restore his eyesight but all their efforts went in vain. Later the government has compensated him by providing the job of telephone operator at the state-owned pharmaceuticals company Essential Drugs Company Limited (EDCL). After losing his eyesight unfortunate Siddiqur said that he would be happy if the government addresses the problems that the students of seven DU affiliated colleges have been going through. Since then 22 months have gone, but his wish has not been fulfilled yet! Still Siddiqur’s friends and fellow students need to occupy streets to attract the attention of the government so that they concentrate on their demands and take necessary steps!

The Ministry of Education affiliated seven government colleges of the capital — Dhaka College, Eden Mohila College, Kabi Nazrul Government College, Government Titumir College, Government Shaheed Suhrawardy College, Begum Badrunnesa Government Mohila College, and Mirpur Government Bangla College — with Dhaka University on February 16, 2017. Then they claimed it an initiative to improve the quality of education in these colleges. It is mentionable that these educational institutions are some of the oldest and most reputed government colleges of Dhaka and they were functioning well under National University. But since they were affiliated with DU, their regular academic progress began to face setbacks.

Therefore the students of these seven colleges took part in a procession on July 20, 2017, demanding necessary initiatives to declare the routine of their examinations and publish results of the last examinations, when Siddiqur lost his eyesight and police filed cases against 1200 students. Agitated students conducted their second programme in October of the same year to get results of their honours final examinations by taking position in the Nilkhet intersection. Then they occupied the same intersection again on January 11, 2018, for the publication of the results of 2014-15 session and the commencement of the classes of third year. In this way frustrated students of seven DU affiliated colleges have been expressing their dissatisfaction repeatedly. Their most recent such programme was conducted on April 24 in Nilkhet intersection to fulfill their five-point demand. Then Dhaka University’s proctor AKM Golam Rabban met with the agitated students and assured them that their demands will be addressed. Following a meeting with all the stakeholders the previous day, on April 29, Dhaka University authority said in a press release that they will resolve all the problems of the students of DU affiliated seven colleges. But the students are not much hopeful regarding their promises as their past experience testimonies that DU authorities do not keep their words!

Initially after the affiliation with DU students of the seven government colleges were happy as they thought that inclusion of Dhaka University’s name as their educational institution would make their certificates more valuable and they would get a mileage in their career. They also presumed that they would enjoy better facilities than the students studying in other colleges under National University. But their optimism gradually turned into a mirage. Everything, from their tutorial examinations, year final examinations to publications of results, has become irregular. Dhaka University hasn’t prepared an academic calendar for them. Thus the students of these institutions are struggling to complete their academic studies in time. While talking to us Md. Ariful Islam, a masters student of Accounting of Government Titumir College, shared that, “When I completed my graduation, my college was affiliated with National University. Despite some problems I could finish my honours course in pre-scheduled time. There was session jam for a few months but the NU authority recovered it through operating crash programmes. I thought affiliation of my college with DU would provide me better opportunities but it ultimately has worsened my situation. Despite being a student of 2015-16 session I haven’t been able to attend my masters final examination yet whereas my batch mates, who studied in the colleges affiliated with NU, already have passed their masters examination.”

Apart from taking classes teachers of the seven DU affiliated colleges even cannot fix the date of the tutorial examinations of their students. Sometimes when they need to publish the exam schedule, they do it just a day before the examination. When asked about such hastiness by the students, the teachers completely fail to come up with a befitting reply despite knowing that such sudden announcement is irrational as they don’t have any other way instead of following the instructions of DU authority. Besides, students often get frustrated after the publications of their results. Ananya Sarker Proma, a second-year student of Political Science of Eden Mohila College, stated, “I decided to study at Eden Mohila College thinking that the affiliation of this institution with DU will ensure quality education here! Initially some of the Dhaka University teachers took a few classes in our college, but this is not happening any more. I attended my first year final examinations more than four months ago and now I am doing my second year’s classes. But the results of my first year final examinations have not been published yet. I am now feeling anxious after observing the results of the students of other departments. I don’t know what is waiting for me.”

This concern is valid as in some cases students of seven DU affiliated colleges are forced to face the most humiliating experience after the publications of their results. For example, result of the third year’s students of Management was published on April 2. Out of 300 Management students of Mirpur Government Bangla College no one passed in all subjects! According to the results published by the authorities, students have failed indiscriminately in a subject named Insurance and Risk Management! A few months ago results of the students of English Department of 2016-17 sessions was published where 300 students of Eden Mohila College have failed in a subject titled History of the emergence of Bangladesh! Later following their appeal to review the results only 4 students passed! Besides, many students of Dhaka College have complained that albeit they attended improvement examination in one subject, their result is showing that they have failed in several subjects! There are allegations that the officials of DU don’t coordinate their CGPA after publishing the results of their improvement examinations! In such situations students of seven DU affiliated colleges are feeling completely helpless in absence of a central administrative office for them.

Before the establishment of National University these seven government colleges of Dhaka were affiliated with Dhaka University. Back then DU had necessary manpower and infrastructure to conduct the academic activities of these colleges. Following the foundation of NU the DU authority restructured their administration and began using old infrastructures for DU’s academic purpose. Without developing necessary infrastructure and recruiting new manpower the decision of affiliation seems ridiculous to many. When asked about the affiliation of seven government colleges with DU, educationist Professor Kazi Faruk Ahmed replied, “The decision of affiliating seven government colleges with Dhaka University was taken suddenly. No research or feasibility study was conducted before finalising it! Dhaka University authority had no preparation to deal with the academic studies of 1,67,236 students of these seven colleges! Even then they were interested in incorporating these colleges only to increase the amount of their annual income! Such irrational decision taken by the policymakers without prior discussion with the educationists has pushed the future of about two lakh students of these seven colleges into a grave uncertainty.”