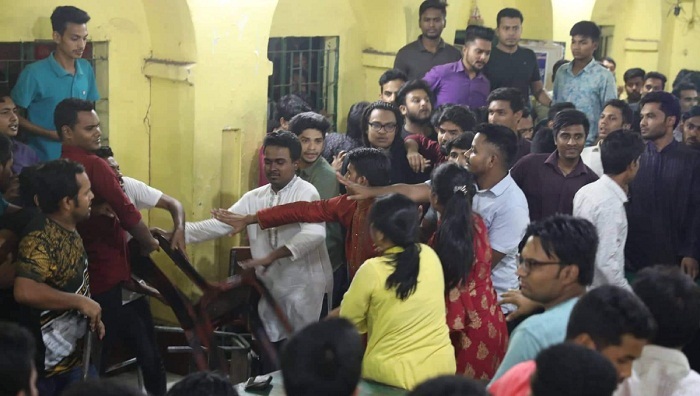 Post-deprived and devalued leaders of the committee of Bangladesh Chhatra League (BCL), the student wing of ruling Awami League, revealed a list of ninety nine controversial leaders, who were awarded different posts in newly announced full-fledged central committee of BCL.

They revealed the list at a press conference held at Madhur Canteen on the Dhaka University campus on Thursday noon.

BCL president and secretary promised to suspend those controversial leaders, against whom several allegations, including non-students, over-age, marriages, criminal accusations and anti-Liberation War views, were brought.

They also demanded that dope test would be made mandatory for the inclusion of someone in BCL committee.

Protesting BCL leaders said that they are not against their president and general secretary, rather against the controversial persons and the intruders.

The BCL on Monday announced its 301-member full-fledged central committee, touching off controversy and demonstrations by some of those who could not make it to the new committee and were devalued.

On Monday evening, the post deprived and the devalued brought out a procession, which was allegedly attacked by the post-holders of the new committee.

While arranging a press conference at Madhur Canteen to wage their demand, they also faced similar attack, which injured at least six of them.

This faction is demonstrating protest to suspend the controversial leaders from the committee. They also demanded a fresh committee and inclusion of them in it.