100 sharks wash up dead on beach in Wales 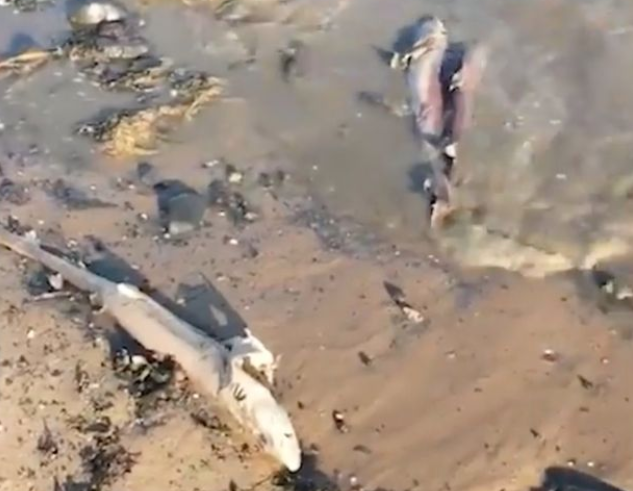 Up to 100 sharks washed up dead on a beach in Wales, with some suspecting foul play.

A video posted on Facebook showed the sharks strewn across the beach in Carmarthenshire, Wales, with the woman who filmed the clip estimating around 100 dead fish on the shore.

It is believed fishermen illegally removed the dorsal fins of some of the animals before throwing them back into the water, leaving them unable to swim, reports Wales Online .

The woman who filmed the scene on the beach said: "Such a sad, wasteful sight. I stopped counting in the end as every wave brought more bodies.

"It was mostly smooth-hounds down Burry Port, but heavily pregnant ones with pups hanging out of them.

"I dread to think how many were still floating in the sea. I'm sure what we saw was a small percentage of what was thrown back."

A spokesman for the Marine Conservation Society said the fish appeared to be smooth-hounds, also called dogfish.

They are a type of shark common in our waters, which are often caught by trawlers as a bycatch and are dumped at sea.

Footage of the Welsh beach appears to show some of the fish without their dorsal fins.

The spokesman said: "Shark finning for overseas markets in Welsh waters would be highly unusual and almost certainly illegal."

Shark finning is the practice of removing the fins from a captured shark and discarding the animal at sea, still living or dead.

Unable to swim effectively without their dorsal fins, they sink to the bottom of the sea and die of suffocation or are eaten by other predators.

The fins are often used for shark fin soup and traditional cures, particularly in China and the surrounding area.

It's estimated that finning kills up to 100 million sharks each year.