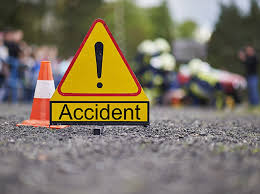 Three people including a pair of siblings were killed in separate road accidents in Sherpur and Shibganj upazilas of Bogura on Wednesday.

Ratan Hossain, station officer of Sherpur Fire Service, said the two siblings were killed as the motorcycle collided head-on with a running truck in Kellaposhi area on Sherpur-Nandigram regional highway at 6:00pm.

The deceased were Golam Rabbi, 18, and his sister Mariyam, 16. Their father Abdul Majid is a resident of Sekelmaria village of Bhatara union in Nandigram upazila.

Iqbal Hossain, sub inspector of Sherpur police station, said the truck driver has been detained by police. However, he did not reveal the driver's identity.

In another accident, a woman was run over by a speedy truck after she fell from a motorcycle being hit by another truck in Mokamtala of Shibganj at 8.15pm.

Sanatan Chandra, in-charge of Mokamtala police investigation center, said the victim was riding pillion on the motorcycle with her husband, who was seriously injured in the accident.

The identities of the victims could not be traced immediately.