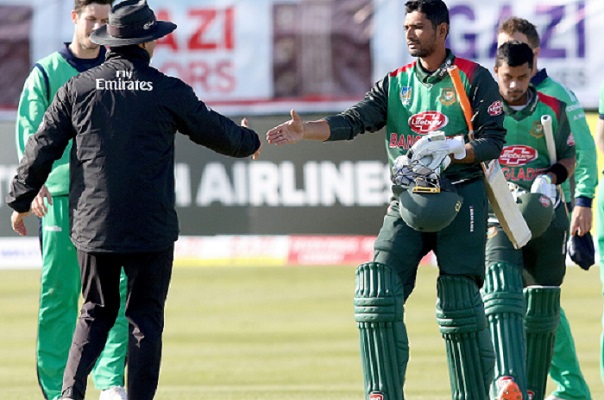 Bangladesh produced another dominating performance in the ongoing tri-nation one-day international tournament as they beat hosts Ireland by six wickets at Clontarf Cricket Club in Dublin on Wednesday.

Pacer Abu Jayed was the star performer for the Tigers as he claimed 5-58, his maiden five-wicket haul in ODIs that helped Bangladesh restrict Ireland to 292-8 after they opted to bat first in the final league match.

Paul Stirling struck 130 off 141 balls, his eighth ODI hundred while their skipper William Porterfield made 94 off 106 balls that put Ireland in front before Bangladesh claw their way back into the contest with late flurry of wickets.

Openers Tamim Iqbal and Liton Das delivered blazing start as both scored their respective fifties while Sakib al Hasan (50 off 51), Mushfiqur Rahim (35) and Mahmudullah (35 not out)all played handy knocks as Bangladesh reached 294-4 in 43 overs to complete another comprehensive win.

Bangladesh will now face West Indies in the final on Friday at Malahide Cricket Club Ground in Dublin.

Chasing a challenging total, Tamim and Liton provided Bangladesh strong start putting up 117 runs for opening stand before the former was played-on by pacer Boyd Rankin for 57 off 53.

Liton looked to be in-form and hit some good-looking shots before he was bowled by Barry McCarthy after scoring 76 off 67 balls, which was ornamented with nine fours and a six.

Sakib and Mushfiq took all control in the chase as they added 64 runs for third wicket before the latter was caught behind for 35.

Bangladesh suffered an injury scare when Sakib left the field with a side strain in the 37th over but Mahmudullah continued his good work to take Bangladesh to a comfortable win.

A 174-run stand between Paul Stirling and William Porterfield set stage for Ireland’s 292/8 despite their late stumble against Bangladesh in game six of the tri-nation series.

Bangladesh had come in to the contest without lead pacer Mustafizur Rahman, who had returned a match-winning four-fer, and Soumya Sarkar.

The veteran duo of Porterfield and Stirling provided solidity to the innings and lay a steady foundation in the middle overs.

While Porterfield fell six short of his century - a 106-ball knock which included seven boundaries and two sixes - his fall was followed by a collapse. Stirling’s fine knock of 130 - his seventh ODI century - came to an end in the 47th over when he wanted to lift Jayed over the long on region, only to mistime the shot and find the fielder in the deep. His 141-ball innings, which included eight boundaries and four sixes was accorded a standing ovation as he walked back to the pavilion.

Saifuddin, having recovered from a back injury, snared a brace in his final over as Ireland lost five in the last six overs of their innings. Jayed was the wrecker-in-chief, dismissing Porterfield, Kevin O’Brien, Stirling and Gary Wilson in his last three overs, to return his maiden ODI fifer as Ireland looked to pace their innings towards the end.

Shakib Al Hasan, who had proven to be economical in the previous outings this series, proved to be the most expensive.