Clashes leave Kolkata on edge ahead of Indian vote climax 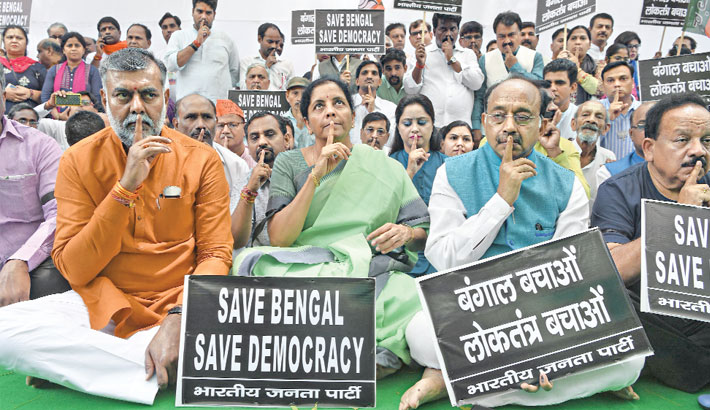 KOLKATA: Clashes between followers of Prime Minister Narendra Modi and a firebrand opposition leader heightened tensions in the key Indian city of Kolkata on Wednesday ahead of the final round of the country’s hard-fought national election, reports AFP.

More than a hundred people were arrested after street battles that forced Amit Shah, president of the ruling Bharatiya Janata Party (BJP), to leave an election rally in the eastern metropolis under armed guard, police said.

A bust of renowned Bengal reformer, Ishwar Chandra Vidyasagar, was destroyed and a college named after him ransacked in the troubles late Tuesday, which the BJP and rival Trinamool Congress (TMC) angrily blamed on each other.

“I could not recognize the office when I stepped in today,” Gautam Kundu, the college principal, told AFP. “Broken shards of glass lay all over and a statue of Vidyasagar was missing from the glass case.

“They (the teachers) were cowering in fear inside the classrooms when the attack took place. We are shocked,” he said.

Security was stepped up outside the college as well as at Calcutta University where students demonstrated with placards reading “Go Back Narendra Modi”, “Go Back BJP”.

West Bengal state has been hit by repeated violence between the two parties during the six-week-long election that ends Sunday. Results will be announced on May 23.

Modi’s BJP hopes to capture many of the state’s 42 parliament seats from the TMC to compensate for losses predicted in other regions.

“Has Bengal acquired a government of gangsters? The attack on Amit Shah’s peaceful rally by TMC is deplorable,” Finance Minister Arun Jaitley said on Twitter.

Modi condemned what he called “TMC goons” for launching the street battles, in a television interview.

Banerjee hit back by accusing Shah acting like a “god” who does not allow protests.

She led a rally of several thousand supporters through the city late Wednesday. The communist party held its own rally.

Trouble erupted when Shah’s convoy drove past the entrance to Calcutta University, where TMC student wing activists had gathered.

“TMC supporters started throwing stones at the tail-end of the rally. A group of people then set two motorbikes and a bicycle on fire,” said witness Partha Sinha.

Political observers say the aggressive campaign by Modi’s party against the TMC in the eastern state has made it one of the most bitter contests in the election.

Modi won a landslide victory in 2014 but many pollsters expect him to lose his overall majority this time. A good performance in West Bengal would significantly improve his chances of a second term.

The BJP and Banerjee’s party have also been at loggerheads over a BJP activist arrested for posting a doctored image on Facebook with Banerjee’s head on the body of Bollywood star Priyanka Chopra wearing a revealing dress.

She was released on Wednesday after the Supreme Court intervened.

But Sharma told journalists after her release: “All I did was post a meme and I was jailed for 5 days. I am not sorry.”