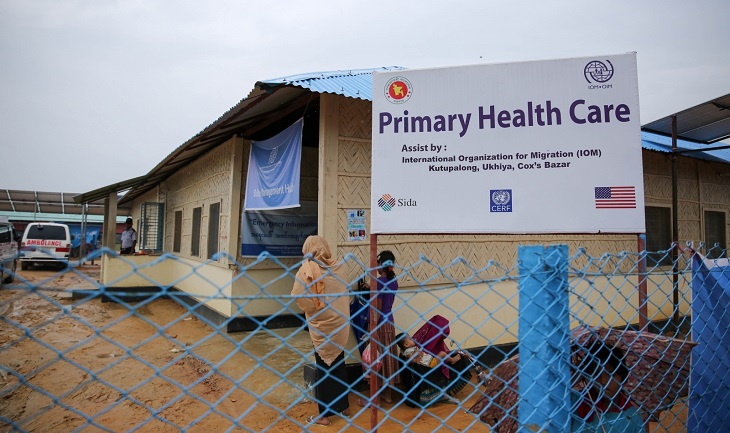 As the monsoon expected to start within the next month, International Organization for Migration (IOM) has warned that healthcare in the Rohingya camps is still inadequate to meet the needs of its sheltered people.

However, the situation on the ground has improved beyond recognition just eighteen months later, according to IOM Emergency Health Coordinator Dr Francis Tabu.

Many of the bamboo clinics have been upgraded to pre-fabricated facilities and many more healthcare staffs have been brought on board.

At a health workshop to take stock of achievements and plan for the challenges ahead, Dr Tabu told the IOM health team that better feedback from the refugees and local communities was essential if they were to “up their game and improve the quality of services.”

“We need to encourage suggestions from patients and incentivize people to provide feedback to (IOM’s) Feedback and Information Centres,” he said.

IOM now has 45 doctors, 40 midwives, 31 nurses, as well as ambulance drivers and other ancillary staff working in both the camps and host communities. Over a million patients have received consultations at 11 IOM and nine IOM-supported government clinics since August 2017. Over 3,200 babies were successfully delivered in the first three months of this year.

Dr. Samir Howlader, an IOM National Health Programme Officer shared his beginning experience, said that less than two years ago when most health services were delivered on foot or in rented ambulances to the hundreds of thousands of Rohingya refugees streaming into Bangladesh from Myanmar.

“There were effectively no facilities in August 2017 for the new arrivals,” he said, referring to the nearly one million Rohingyas who fled across the border to Cox’s Bazar.

“Many of them had dysentery, diarrhea and respiratory tract infections. There were also burns, bullet wounds and other horrible injuries. It would have strained even an advanced health system.”