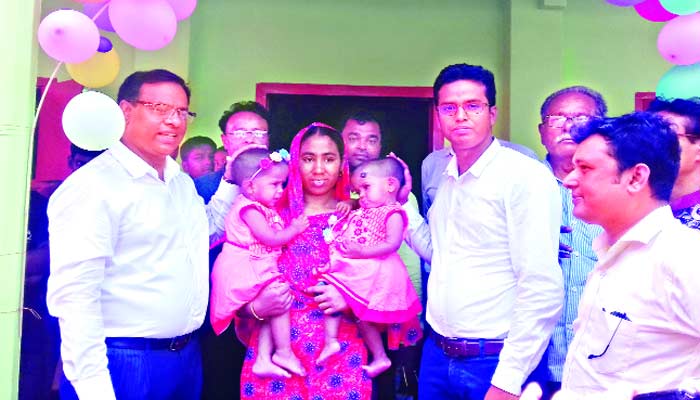 Conjoined babies Tofa and Tohura, who were separated in a pioneering surgery in Dhaka Medical College Hospital (DMCH) on August 1, 2017, get a new house.

Tofa and Tohura entered in the house named ‘Sukher Nir’ on their mother’s lap Shahida Begum along with Deputy Commissioner (DC) of Gaibandha and Upazila Nirbahi Officer (UNO) of Sundarganj on Tuesday.

The tin-shed building was built as per the instruction of the DC and which was financed by the UNO.

A discussion meeting was held marking the inauguration of the house with UNO Md Soleman Ali in the chair where DC of Gaibandha Abdul Matin attended as the chief guest.

On August 1, the conjoined twins had been separated after a nine-hour-long surgery at the DMCH. A 30-member medical team of DMCH comprising doctors from different departments, including anesthesia, burn and plastic surgery, orthopedics, neurosurgery, urology and radiology operated on the children.

This was the first ever in the history of pediatric surgery in the country in which a pair of ‘Pygopagus’ twins were separated.

The 10-month-old twins were born in Dohbon village of Gaibandha district.

During their birth, they were joined from back to bellow their waist and shared one anus.