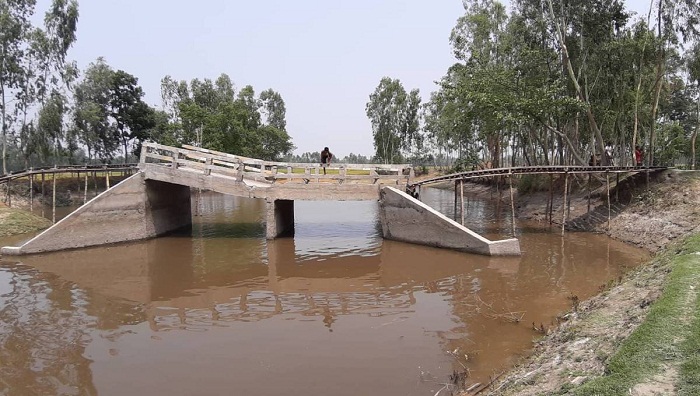 Over 40,000 residents of 20 villages in Ulipur upazila of Kurigram have been having a tough time commuting after a key bridge on a water body was damaged shortly after its construction.

Although locals blame the use of low-grade materials, project officials claim that the bridge partially caved in during the 2015 flood because of its small size.

The 36-foot bridge was built on ‘Sakor Par Beel’ connecting Buraburi Bazar and Janatarhaat by the government at a cost of Tk 27 lakh. The contractor company was Hamid Traders.

Once the bridge became unusable, locals raised funds and built two makeshift structures on both ends to connect to the remaining structure of the bridge. The wood and bamboo structures are supported by bamboo columns that can collapse at any moment.

People use the bridge ignoring the risks. Locals said it is the most important means of communication for over 40,000 people. Farmers have to pay extra to take their crops to market by another distant route.

Rezaul Islam, a resident of Buraburi union, said he was using this route because the alternative one was distant. He pushed his motorcycle over the makeshift bridge.

Shamshul Islam, a local, recounted how they protested against the contractor who used low-grade sand but the then chairman sided with the construction firm.

“Our protest went in vain and the bridge partially caved in months after it was built,” he said.

Md Rabiul Islam, Ulipur upazila project implementation officer, insisted that the bridge’s construction work had no fault and that it might have been damaged due to huge water pressure during flood.

“A 60-70 feet long bridge is needed on the Beel. I’ve advised the Upazila Nirbahi Officer to have the bridge built by some other government agencies,” he said.

Ulipur UNO Md Abdul Kader said that he was investigating how the bridge was damaged and would “soon” file a report to the concerned authorities.