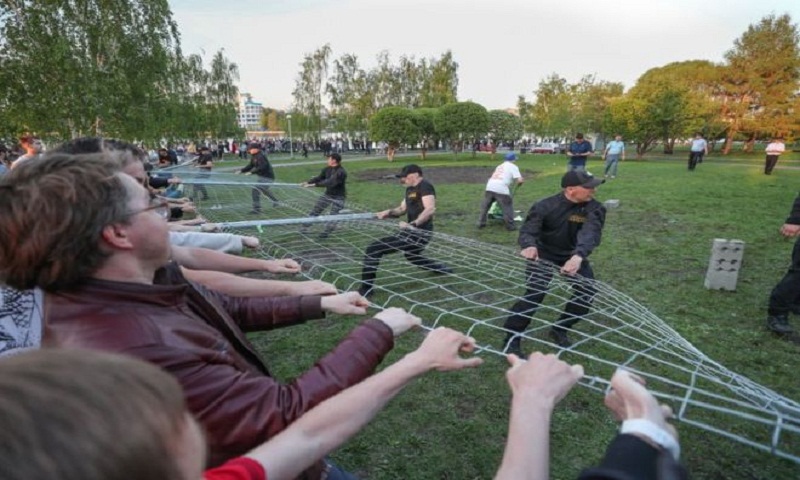 About 2,000 people have protested against a church being built on a park square in Yekaterinburg in Russia.

Tuesday was the second day of protests in what is a long-standing conflict over the planned church.

Activists say building St Catherine's Cathedral on the square will destroy one of the city's few green spaces.

But the Russian Orthodox Church says it needs new churches to replace the many that were destroyed under Soviet anti-religion laws.

This particular church will be a replica of one such cathedral that was demolished in 1930.

It is due to be completed in 2023 in time for the 300th anniversary of the founding of Yekaterinburg, Russia's fourth-largest city.

Kremlin spokesman Dmitry Peskov said that the government was monitoring the situation.

Among the pro-church fighters was Ivan Shtyrkov, also known as the Ural Hulk - a professional MMA fighter and head of the RCC's academy.

Protests continued through the night, and throughout the following day.

According to independent Russian news outlets, at least seven protesters were arrested on Tuesday and taken into police custody. One person reportedly suffered a broken rib.

Why are people against the church?

The church has been a source of controversy since plans to build it were first announced almost a decade ago, in 2010.

On its website the local activist group in Yekaterinburg says: "To build the cathedral they want to destroy the park, which is a favourite place for residents to relax."

Others have said that the city is in need of more, not fewer, parks.

"Nobody is against a church, but everyone is against building one here," one protester told Radio Free Europe. "There are lots of churches here... But not much green space is left in the city."