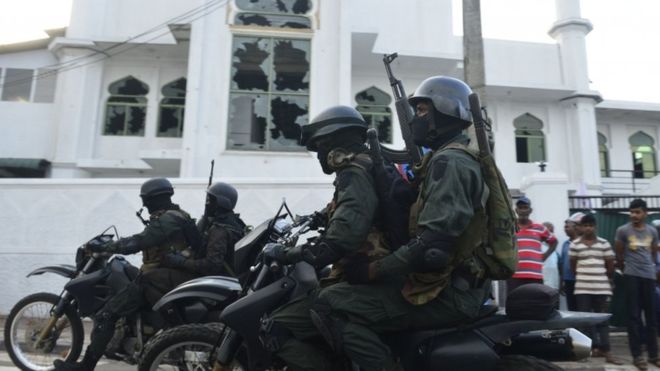 Sri Lanka has imposed a nationwide curfew for the second night in a row after a wave of anti-Muslim violence in the wake of the Easter bombings.

A Muslim man was stabbed to death while rioters torched Muslim-owned shops and vandalised mosques during Monday's attacks.

Police have arrested 60 people, including the leader of a far-right Buddhist group.

The United Nations has called for calm and a "rejection of hate".

A nationwide curfew, declared for the second night running, will come into effect at 21:00 (15:30 GMT) on Tuesday.

The country's North-Western province, where the worst violence flared, will be shut down for longer, police said.

Rioting there, north of the capital Colombo, saw police fire bullets into the air to disperse mobs marauding through several towns.

Tensions have been high since Islamist militants attacked churches and hotels three weeks ago on Easter Sunday, killing more than 250 people.

In response to the rioting, the UN's Colombo office has urged Sri Lankan authorities to "ensure that the situation does not escalate".

It stressed the importance of holding the perpetrators and inciters of violence to account at this "critical juncture" if peace is to be maintained.

In a televised address, Police Chief Chandana Wickramaratne warned that officers would respond to rioters with maximum force.

Visiting Kuliyapitiya - a town where rioting happened - Mr Wickremesinghe said he would not allow the lives of innocent people to be disrupted.

The unrest centred on districts north of the capital, Colombo:

The government says that security forces have restored calm to streets in the areas affected by violence and insist officers are preventing revenge attacks on Muslims.

"What we want to say is that the government is very determined to control this and from tonight onwards it shall be completely controlled," Shiral Lakthilaka, an adviser to the president, told the BBC.