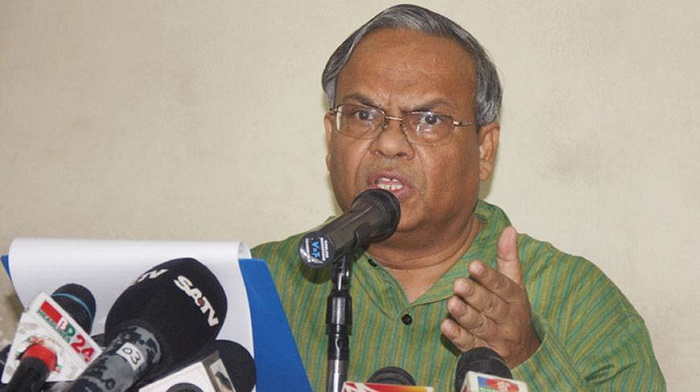 Opposing the government’s move to shift Khaleda Zia to Keraniganj Jail, Bangladesh Nationalist Party (BNP) on Tuesday urged the government to stop its ‘dirty game’ over the life of its ailing chairperson.

“After returning home from London, the Prime Minister asked the ministry concerned to set up court in Keraniganj Jail to hold the trial of cases filed against Khaleda Zia. A plot is on to take our seriously ill leader (Khaleda) to that jail though her treatment has not completed yet,” said BNP senior joint secretary general Ruhul Kabir Rizvi.

Speaking at a press conference at BNP’s Nayapaltan central office, he warned the government not to ‘play with fire’ out of political vengeance. “Stop the dirty game over the life of Khaleda Zia. Don’t influence the court and interfere in granting her bail.”

On Monday, the government decided to hold the trial of 17 cases against her inside the Dhaka Central Jail in Keraniganj.

Protesting the government’s move, Rizvi urged the government not to incarcerate the freedom of court to eliminate its political opponent.

He demanded Khaled Zia be freed from jail. “Or people won’t spare you.”

The BNP leader said they will take to the streets to have their chairperson freed from jail if the government repeatedly obstructs her bail.

Rizvi criticised the Finance Minister for comparing Bangladesh with Canada and Spain in terms of GDP contribution to world economy since Bangladeshis are taking risky voyage to go aboard for lack of jobs in the country.

He also said though the government has failed to create jobs, ministers are signing the songs of cooked-up stories on development and ‘manipulated’ GDP growth to mislead people.