No space for autocracy in Bangladesh: Dr Kamal 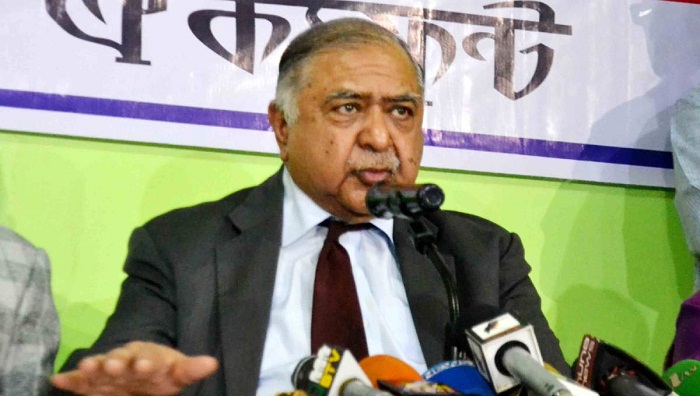 Jatiya Oikya Front convener Dr Kamal Hossain on Monday said those who think of giving autocracy a permanent shape in Bangladesh are living in fool’s paradise as people will surely wake up like that of the 60s to resist it.

“Autocracy repeatedly tried to take a permanent shape in the country destroying democracy, but no one could do that. It’s a light of hope for us. As per my experience, I can give you a 100 percent guarantee that there’s no space in Bangladesh for autocracy,” he said.

Dr Kamal, also the president of Gano Forum, further said, “If the autocrats think they’ll be able to hang onto power for lifelong time using guns, money and other influences, they’re living in fool’s paradise. “

He was speaking at a civic condolence meeting at the Jatiya Press Club in memory of journalist Mahfuz Ullah who died at a hospital in Thailand on April 27 last. Former adviser to a caretaker government Dr Akbar Ali Khan presided over the programme.

Mentioning that many signs of autocracy are visible in the country, Dr Kamal said only people’s unity can help overcome it.

Mahfuz Ullah always spoke the truth without any fear and took stanch in favour of fairness taking risk. “It’s still risky to speak the truth here. But there’s no reason for us to be disappointed,” Dr Kamal said.

Referring to the presence of cross-section of people and leaders of different political parties at the condolence meeting, Dr Kamal said it proves people have still attraction for unity. “Let’s get united based on fairness and the spirit of the Liberation War to take place a mass-upsurge against autocracy like that of the 60s.”

He also said those who will try to divert people from the way of freedom and Liberation War will finally become unsuccessful. “We’re in favour of path of freedom and we’ll turn victorious.”

The Gano Forum president said Mahfuz Ullah tried to inspire people for bringing a social change and ensure their freedom with his fearless assertions. “He‘ll remain as a source of inspiration for us. We should continue to put in efforts to forge a greater unity and use the power of unity to materialise Mahfuz Ullah’s dream.”

“Mahfuz Ullah was also a good writer for which people will remember him for a long time. He could not complete the writing of some more books. Had he been alive, he could have given us courage and strengthened our journey towards democracy,” he observed.

Akbar Ali said Mahfuz Ullah authored the biographies of some politicians of a particular party based on research and correct information. “Those biographies were necessary from the historical point of view.”

Recalling that the journalist severely criticised BNP at a programme in presence of him, the BNP leader said Mahfuz Ullah never hesitated to speak the truth.

“At the tough time of the country, he tried to wake us up with his fearless voice and writings presenting the truth. I miss him a lot as he could inspire us not to get disappointed, but be vocal and courageous,” he observed.

Bangladesh Workers Party President Rashed Khan Menon said Mahfuz Ullah was a brave and honest journalist who will remain alive with his many books and other works.

Menon said Mahfuz Ullah will also be remembered by people for a long time for his book titled ‘Purba Pakistan Chhatra Unioner Itihas’. “It’s his outstanding contribution to politics.”