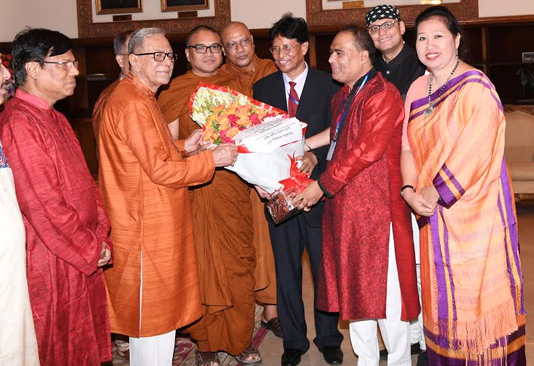 President M Abdul Hamid on Monday urged the members of the Buddhist community to play their due role in the country’s overall development upholding communal harmony, tradition and the immortal ideology of Lord Buddha.

“Bangladesh is a country of communal harmony . . . The main message of all religions is the welfare of mankind,” he said while exchanging greetings with the Buddhist community at Bangabhaban this afternoon on the occasion of Buddha Purnima, the biggest religious festival of the Buddhists.

The head of the state observed that people of all religions had age-long contribution to establish truth, peace and justice in the society.

Mentioning that the existing communal harmony is a part of long-time cultural traditions of the country, the President said people of all religions have been celebrating their respective religions festivals and rituals here ever since its inception.

Besides, ambassadors and high commissioners of different Buddhist countries, including Bhutan, Vietnam and Myanmar, representatives of various international organisations and professionals of Buddhist community, secretaries concerned to the President`s office were present on the occasion.

President Abdul Hamid welcomed the guests and exchanged greetings with them.

Earlier, the Buddhist religious leaders greeted President Hamid by presenting a bouquet to him.