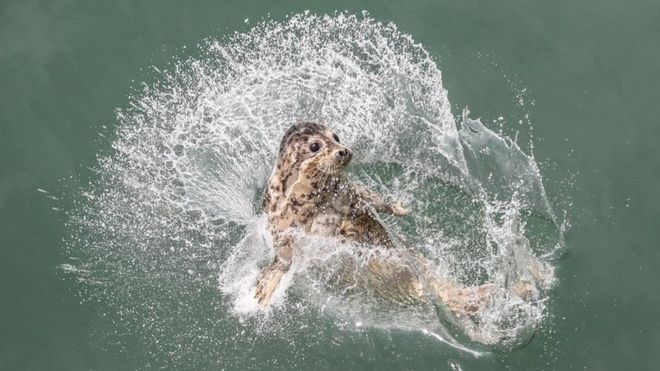 Dozens of spotted seal pups have been released into the wild, months after they were rescued by police from poachers in China.

They were among 100 pups found starving inside a remote farm shed in the Chinese city of Dalian in February.

Some 39 were unable to be saved.

The pups were taken from the wild by traffickers to be sold to aquariums and commercial venues, Humane Society International said.

Eight suspects have been arrested.

When police seized the pups on 11 February, the 61 survivors were sent to marine institutes across China's Liaoning province, where Dalian is located.

The seals were in a very weak condition when they were found, partly because they had been seized at such a young age and had not been sufficiently breastfed, according to state media outlet the Beijing Youth Daily.

After careful treatment at the marine centres, the first batch of pups were deemed healthy enough to be released back into the wild. On 11 April, 24 seals were set free into the waters around Dalian.

The remaining pups had to wait a little longer, but the last 37 were finally released on 10 May.

All the pups were equipped with GPS tags so their whereabouts can be tracked by researchers, according to the China News Service (ECNS).

In recent years, seal pups have been poached and sold to aquariums which train them for performances, or to restaurants to attract customers, Tang Zailin, the head of the Dalian environmental protection volunteers association, told ECNS.

Seals are a protected species in China and anyone found catching endangered wildlife can be jailed for up to 10 years.