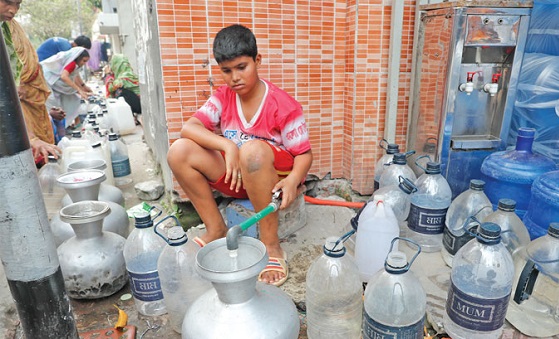 Local people collect water free of cost from a house in the capital’s Khilgaon area on Sunday as a severe water crisis gripped the area. — Reaz Ahmed Sumon

A large number of residents of capital Dhaka, which has a population of about 19 million, have been facing acute water shortages amid a heat wave in this holy month of Ramadan.

They alleged that there has been practically no water in their taps of their homes during since the heat wave made life miserable. In some parts of the city water shortage is a common problem every year.

They complained that supply was less than the demand causing such water shortages.

“We’re suffering a lot due to severe water crisis. We do not get enough water to eat and take bath properly,” said one Rampura area resident.

Water Supply and Sewerage Authority (WASA) claimed that the use of tap water increased manifold in the capital due to hot weather and holy Ramadan, causing the “temporary” shortages.

Several hundred inhabitants of Rampura area took to the streets on Thursday, demanding adequate water supply to their homes.

The residents of Rampura and Hatirjheel areas alleged that for the past several days the shortage has worsened.

They have informed WASA and local representatives about the water shortage repeatedly, but so far the situation has remained unchanged.

Shefali Begum, a resident of Madhubagh area, said, “We pay water bills regularly, but Wasa is not providing us with water.”

“We’re now compelled to buy water from shops. We use this water for cooking and other domestic purposes.”

Despite repeated calls for solution to the water problem, Wasa is not taking any initiative. Now, we’re forced to get down on the road today, a protester said.

“I heard that today (Thursday) they blocked road for water. Effective measures will be taken to resolve the water problem in the area,” the official said.

In the wake of such a water crisis, a large number of people, mostly women in Khilgaon, Mughda and Maniknagar areas with buckets and pots staged street demonstrations on Saturday, demanding smooth water supply.

Many women and children with buckets and pots in their hands were also seen standing in a long queue near pump stations in Khilgaon area on Saturday to collect water.

Rehana Begum, a resident of South Khilgaon area, alleged that they have been facing an acute water crisis for about three weeks.

“We can neither drink the supplied water nor use it for bath and cooking,” she said.

The people living in Basabo, Maniknagar, Jatrabari, Rampura, Meradia, Badda, Mugda, Jurain and Mirpur as well as old part of Dhaka are worst sufferers from the water crisis.

The people of these areas have to spend most of the daytime in search for drinking water.

Taking the opportunity, a section of Wasa officials are doing a brisk business by selling its water tankers at double prices.

Many alleged that Wasa operators are creating an artificial crisis to do a brisk business.

Sohel, a resident of Badda, said, “We haven’t been getting water regularly for the last seven days. So, we are buying drinking water from shops and also water from Wasa water.”

“We cannot do household chores properly and even take a bath regularly.”

The people in many places of Jatrabari, Syedabad, Wari, Meradia, Goran, Hazaribagh, Ibrahimpur, Mirpur and Gulistan alleged that they always get filthy water supply which is not fit for drinking, bathing, cooking and even washing clothes.

They alleged if boiled, the sticky green water supplied by the water supply authority got stickier and thicker.

Wasa officials admitted to stinking and dirty water. The problem might have been created by cracks in pipelines, with dirty water from open road sewers mixing with water supplied, they said.

Jubair Ahmed of Dhalpur said many people in the area are suffering from skin problems, including itching, after bathing with supplied water.

Many are suffering from jaundice and other chronic diseases after using the dirty water. He said the problem is endemic in the area for years and gets acute in the summer.

An official at Sayedabad Water Treatment Plant said they get many complains every day, but could do nothing as the treatment plant was not functioning properly.

The engineer said that the source water was too polluted to be treated properly.

A councillor for women reserved seat-1 at Dhaka South City Corporation alleged that hundreds of house owners complained that the water supply agency took no measures to resolve the water crisis.

She said the residents of Sepahibagh, Bhuiyanpara, Goran and Meradia asked for her intervention to solve the crisis but she could do nothing.

Hasan Ali, a resident of Nabinbag in Meradia, said that local residents are forced to buy drinking water as they could not drink supplied stinking water even after boiling.

Wasa Managing Director Taksim A Khan said Dhaka Wasa has now a production capacity of about 2550 million litres of water a day. And daily demand is 2500 MLD, which is totally supplied by Dhaka WASA.

During this time, he said that 43 water-carrying vehicles and 34 trolleys are ready for dry season and the month of Ramadan.

He said: “If a pump breaks out, it will be repaired within 12 hours. All the Mods zones of Dhaka WASA, including twelve complaint centres, will be kept open for 24 hours.”

During iftar and Sahari, water will be supplied to various public places through trolley and vans.

Generators have been provided for deep tube wells so that it can be operated during load shedding. A total of 11 vigilance teams are active in monitoring water pumps.

A Wasa official said: “Though the production is more than the demand, the crisis appears for some technical problems, including old supply lines,” he added.

“The demand for water has increased manifold due to the hot summer. For this reason, a water crisis has taken place in some areas. The crisis will be solved if rain falls for one or two day,” he added.

About 87 percent of Wasa’s supply comes from groundwater, mostly from deep tube-wells, while the rest is coming from its treatment plants.