‘Fasting Is a Shield’ 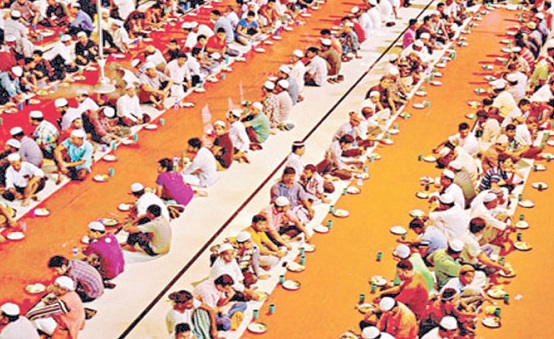 The month of Ramadan has a very special significance in Islam and in the lives of the Muslims around the world. In this holy month, Muslims observe fasting which means ‘abstention from all or some kinds of food or drink, especially as a religious observance.’ Here, it also needs to be mentioned that the Holy Quran was revealed to the Prophet Muhammad (Pbuh) in this month. No other month in the Islamic year carries such great importance as the month of Ramadan. It is a month to fast, offer special prayers and supplication and also a month especially devoted to the recitation and study of the Holy Quran. In Ramadan, everyone tries to excel in kindness, charity, generosity and in every good deed. Currently, Islam is the 2nd largest religion in the world. It has close to 2 billion followers, popularly known as Muslims. There are Muslims around the continents. In some countries, they are in absolute majority. Muslims in large number lives in Indonesia, India, Pakistan, Bangladesh, the Middle East and Maldives. Here we see the largest concentration of Muslim population in the world. The others live in Africa, the Americas, Central Asia, China, Russia and the Philippines. According to one source, presently, it is the fastest growing religion in the world. Islam as a religion comprises of five pillars. These are five acts considered obligatory for all Muslims. These include Shahadah, Salat, Zakat, Sawm or Siyyam and Hajj. The Shahada is the fundamental statement of faith and commitment made by Muslims: ‘There is no God but God (Allah), and Muhammad is His Messenger.’ It is through which all Muslims conform to the will of Allah. Salah or Prayer is performed five times a day. The term Zakat refers to the obligatory donation of a portion of a Muslim’s surplus wealth. These charities are used to relieve suffering of the distressed. Muslims also require to Sawm or fast during the month Ramadan, the ninth month in the Islamic lunar calendar. All Muslims, except those who are elderly, ill, pregnant or breast-feeding and children, must fast during Ramadan. The Hajj or the pilgrimage to Mecca is a duty that every Muslim who has means or resources should perform or undertake at least once during their lifetime.

The Sawm or fasting is the Fourth Pillar of Islam. Regarding fasting, the holy Quran states “eat and drink until the whiteness of the day becomes distinct from the blackness of the night at dawn, then complete the fast till night…”. The fast occurs from dawn to sunset each day during which time Muslims are expected to prohibit themselves from any food, drink, sexual intercourse, or smoking. However, after sunset and before dawn, individuals can do those. Ramadan is a period of reflection when Muslims are called upon to recharge their faith, increment their charity, and make apology. In this month, Muslims are also expected to put more effort into following the teachings of Islam by refraining from violence, anger, envy, greed and lust. According to a Hadith, ‘Fasting is a Shield’. This Hadith suggests that the fasting person is required to guard his fast by adopting a good attitude and avoiding a bad one, so that fasting will produce the expected results and thus he will earn the forgiveness that is promised in return. Thus, fasting helps Muslims develop self-control, gain a better understanding of Allah’s gifts and greater compassion and tolerance. The virtue of fasting is that it resists all forms of evil and unlawful deeds.

Now, the world is at a cross road. Everywhere, we see rises of conflict, anarchy, hatred, intolerance and lust for worldly pleasures. Muslims are divided among themselves for one reason or the other. These divisions lead to tensions and conflicts causing death of fellow Muslims and other innocent people and destruction of assets and properties. Again, we seek to enjoy all worldly pleasures by any means, disregarding human values, cultures and principles. Muslims in overwhelming cases are also no exception to these negative aspects of today’s world. For them, the importance of fasting must carry special meaning. Considering it as a shield, they need to protect themselves or shy away from all bad deeds and practices. Unbridled lust for worldly pleasures leads them to corrupt practices of all kinds. These practices cause harm to everyone including those who indulge in them. Amassing wealth through corruption also deprives others of their right to wealth. These are grave sins in the eyes of Islam and for them, Muslims have been warned of dire consequences and punishment. Bangladesh as a nation is also experiencing all those negative things mentioned above. Corruption exists everywhere at an alarming level. Crimes of various natures are also increasing at geometric progression. In recent times, violence, especially sexual harassment, rape and murder have rocked the nation. It appears that these are now everyday affairs of a large number of people and they get away after committing these crimes by any means disregarding the law enforcement and the justice system. Here, it may be noted that the law enforcement and justice system are of course effective deterrents to all these heinous crimes but religious belief and practices are also proven means for the development of necessary values and culture against these. Here lies the real significance of fasting in the lives of the Muslims especially of Bangladesh. If we want to free our country from all these crimes, the lessons learned and teachings of fasting like tolerance, compassion, restraining unlawful worldly pleasures including carnal desires is of utmost importance. At this crucial juncture of our lives as Muslims and citizens of Bangladesh we need to inculcate within us the true spirit of Ramadan and consider fasting as a shield.

(Different sources of information are acknowledged with gratitude).