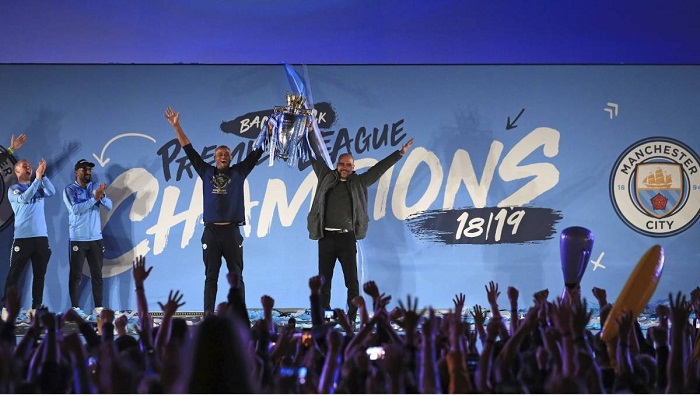 All the strain Pep Guardiola feels during the pursuit of titles becomes worthwhile when a winners' medal is placed around his neck.

It happens a lot.

Manchester City won its second straight Premier League trophy on Sunday, finishing one point ahead of Liverpool in a thrilling title race and giving Guardiola eight league championships over 10 years in three countries.

"We're so, so tired, but at the same time winning the title gives you a lot of energy," Guardiola said after the clinching 4-1 victory over Brighton, "and is so addictive."

Winning has become routine for City in a way it never was before the flow of Abu Dhabi sovereign wealth began in 2008.

When Sheikh Mansour bought City, City's only English championships in a history stretching back to 1880 were won in 1937 and 1968.

Now the club that was trampled over for so many years by Manchester United — and had to escape the third tier 20 years ago this month — is the force of English football with four titles in eight seasons. City finished first in 2012 under Roberto Mancini and '14 led by Manuel Pellegrini, and then under Guardiola became the first repeat champion in a decade since United.

"This is the toughest one," Guardiola said, "especially (because) of the rival we had to face all season."

Guardiola sets standards on the field that require rivals to raise theirs.

City trailed Liverpool by seven points in late December but won its final 14 games after a Jan. 29 defeat at Newcastle and finished with 98 points, the second-highest total in English history behind its 100 last year. Liverpool, chasing its first championship in 29 years, finished with the highest total for a non-champion.

City became the first team to retain the trophy since Manchester United won its third straight in the 2007-08, one of 10 it earned under manager Alex Ferguson.

As City flew back to Manchester for a celebration with fans outside its Etihad Stadium, United supporters were reeling from a loss to Cardiff that saw Ole Gunnar Solskjaer's side finish in sixth — 32 points behind its neighbor — and without any silverware.

City remains on course for an English treble, having already collected a League Cup and preparing for the FA Cup final against Watford on Saturday.

"The big competitors are like this," Guardiola said. "They are never satisfied feeling this is enough."

But the future is not all bright for a club in the midst of multiple investigations by footballing authorities following leaks of internal correspondence.

The Premier League is looking into whether City broke any rules covering financial compliance, third-party ownership and the recruitment of youngsters.

UEFA is investigating if City tried to disguise the source of revenue from overvalued sponsorships from Abu Dhabi, a case that could potentially lead to a ban from the Champions League — the one major trophy to elude the club.