US will suffer from tariffs, Trump aide Larry Kudlow admits 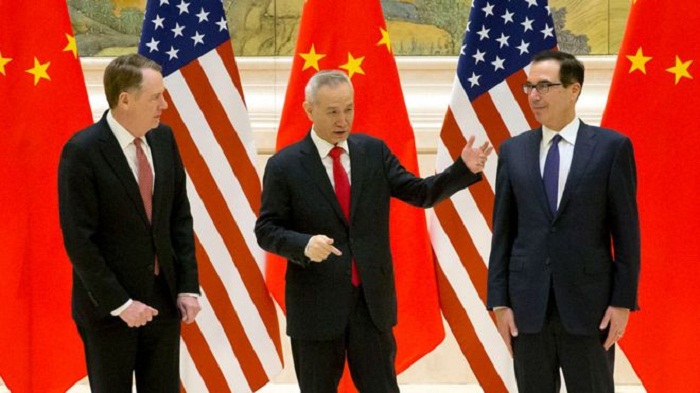 One of Donald Trump's top economic advisers has acknowledged the president was wrong to suggest that China would pay tariffs on its exports to the US.

Larry Kudlow, who heads the National Economic Council, accepted it was US businesses that paid the import tax.

He told Fox News that he believed "both sides will suffer" from the escalating trade dispute.

On Friday Mr Trump tweeted that tariffs on $250bn of goods coming into the US were being paid "by China".

The president argued there was "no need to rush" into a trade agreement with China, as the US Treasury was benefiting from these "massive payments".

However, in an interview with Fox News Sunday, Mr Kudlow admitted that it was American businesses that paid the tariffs on any goods brought in from China, and that US consumers would also foot the bill if firms passed on the cost increase.

Mr Kudlow said he thought the tariffs would also have an impact on China's economy, as the higher cost would reduce US demand for Chinese goods.

"Both sides will suffer on this," he said.

Last year the US imposed a 10% tariff on $200bn worth of Chinese products - including fish, handbags, clothing and footwear.

The firms paying the additional tariff can choose to absorb it themselves, pass it on to consumers in the form of higher prices, or ask their suppliers to reduce their prices.

Last week the US said it was increasing tariffs from 10% to 25% on $200bn (£153.7bn) of goods from China. President Trump said Beijing "broke the deal" by backtracking on earlier commitments to change its policies.

Mr Trump said a process had begun to place the full 25% tariff on a further $325bn of Chinese goods, causing concern over the impact the ongoing tit-for-tat trade spat between the world's two largest economies might have on global growth.

China said it deeply regretted the US action and would take "necessary counter-measures".

Despite two days of negotiations in Washington last week there is no indication that the two sides are any closer to resolving their differences.

The US argues that China's trade surplus with the US is the result of unfair practices, include state support for domestic companies. It also accuses China of stealing intellectual property from US firms.

China has responded saying it will not swallow any "bitter fruit". The commentary is due for publication on Monday in the ruling Communist Party's People's Daily.

Talks are expected to resume in Beijing, and Mr Kudlow said there was a "strong possibility" that Trump would meet with China's President Xi Jinping at a G20 summit in Japan in late June.