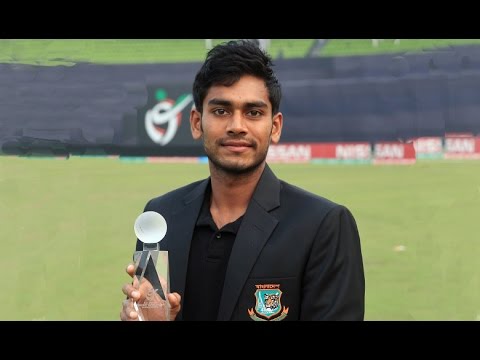 Bangladesh spin all-rounder Mehidy Hasan Miraj said he is ready to take the challenge of playing the ICC Cricket World Cup, the cricket’s biggest extravaganza and play his part perfectly.

Miraj though have experienced to lead the Bangladesh Under-19 team twice in the Youth World Cup, it will be his first World Cup assignment with senior team and he is excited to explain that it was his dream comes true.

“When I led the Under-19 team in youth World Cup, the thing that repeatedly kept bothering me that when will I play the World Cup with senior team. By the grace of Almighty Allah, the dream finally comes true,” Miraj said while talking to the reporters on Saturday in Dublin.

But Mirja knew well it won’t be a cake-walk straightway. Knowing that he would have to take a lot of challenge, Miraj is trying to make himself ready both mentally and physically.

“There will be lot of challenge in the World Cup. Every team is tough there. The main thing is to make myself ready mentally. Hopefully I can give my hundred percent,” he said.

Miraj however revealed that he had high hopes in the World Cup. Though he didn’t disclose this elaborately, he said he would like to play his part perfectly.

“I want to give my hundred percent. I want to sacrifice anything for the sake of my team,” Miraj said. “Team wants me to play a certain role. I want to play my part well too in bowling. In batting, the team wants some quick cameo from me. I know if I can give some quick runs lower down the order, the team will be benefitted.”

Miraj has even the experience of opening the innings when Mashrafe Bin Mortaza suddenly gave him the role of opener during the final of Asia Cup against India. The decision was strategic as Bangladesh wanted to unsettle India’s plan.

The spin all-rounder however is ready to take the challenge again if such kind of role is given to him.

“I am keen to play any kind of role in the World Cup, according to the demand of the team management,” he concluded.