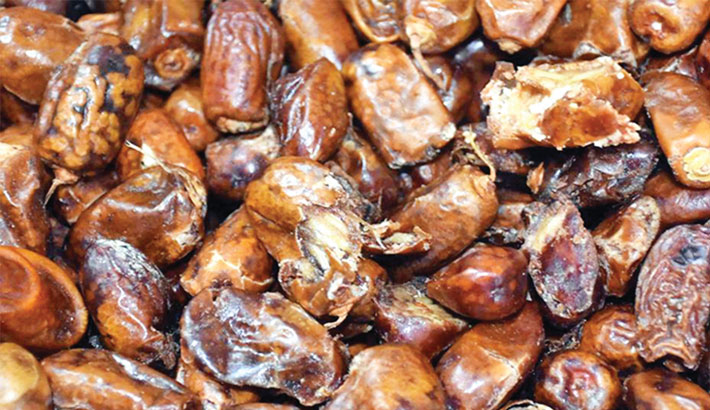 Date-expired and rotten dates have flooded markets across the country as the holy month of Ramadan started pushing up its demand.

During Ramadan, date is popular for iftar. Date-expired dates are selling in markets across the country despite the ongoing anti-adulteration drives.

Consumers do not know how safe are the fruits as a section of unscrupulous traders allegedly use various ingredients to make it shiny.

Traders polish rotten or insect-mixed dates with oil and are selling those at random in city markets after their repacking. In such a situation, shoppers rarely have an opportunity to check their date of expiry, rather a section of consumers buy these at a comparatively lower price.

Experts have advised buyers of dates to check their quality and dates of production which will help them find their fitness for human consumption.

They also urged people to make sure of the weight watching the label on the container. This will safeguard them against frauds.

Sarowar Alam, an executive magistrate of RAB, too advised people not to eat dates having bad smell or taste or in case of existence of insect or insect eggs.

According to him, a large number of people are quite ignorant of the matter and are unable to distinguish between date-expired and healthy dates.

He said that they had conducted drives two months ahead of Ramadan when they found substandard dates as their dates expired three years earlier.

They also seized one kind of syrup made with date juice; he said, adding that the date syrup is used to make rotten dates shiny.

Unscrupulous wholesalers are spreading date-expired dates in markets during Ramadan after repacking and putting new expiry date on packets. They are available in markets in different sizes from 5 KG cartons onwards.

Unscrupulous traders sell rotten dates after packing in new small polythene packets without mentioning the date of expiry, he said, adding that the dates are on sale in comparatively lower prices.

During an anti-adulteration drive at Shahjada Mia Lane of Badamtoli in the capital on May 7, a RAB team led by executive magistrate Sarowar Alam seized moth-eaten and date-expired dates.

During the drive, the team seized 22,000 kg dates from different warehouses and 600 tonnes of date-expired dates from a cold storage owned by Maa Enterprise.

Date-expired dates were refilled in new cartons and stickers were changed to dupe the customers, said Sarowar Alam.

The same mobile court also seized 110 tonnes of substandard, rotten and date- expired dates at Forsahganj in Old Dhaka during their drives till April 26. They realised fines amounting to Tk 99 lakh from three trade organisations and sentenced one people to two years in jail.

On May 7, a mobile court seized 25 kg rotten dates at Hathazari in Chottogram and fined four date sellers.

On May 2, another mobile court seized 100 maunds of dates from Messers Bhai Bhai Fal Vandar at Ullapara in Sirajganj. The court fined two traders Tk 50,000.

On April 29, a mobile court seized 410 tonnes of dates during a drive at Panchaboti, Fatulla in Narayanganj. The court also fined Tk 50,000 to Messers Sahin Cold Storage.

Sirajul Islam, the general secretary of Bangladesh Fresh Fruit Importers’ Association, told the daily sun that imported fruits are usually released from port after being checked by three different organizations. “So, there is no chance of importing date-expired and rotten dates in the country.”

He said that some businessmen had imported a large amount of dates at a time while some of them remained unsold and some of them got rotten due to improper storage capacity.