Tertiary education not the only solution to unemployment 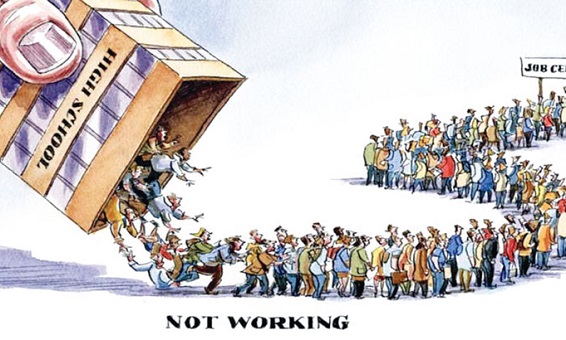 Bangladesh is set to have an economic growth of 8.13 per cent in fiscal year 2018-2019, the highest percentage of economic growth in Bangladesh. Finance Minister AHM Mustafa Kamal said this at the National Economic Council based on reference to provisional estimation of the Bangladesh Bureau of Statistics (BBS).

According to Fahmida Khatun, Executive Director of Centre for Policy Dialogue, Bangladesh, “In 2018, Bangladesh began its graduation process from least developed country to developing country status. Bangladesh has now met the criteria for graduation set by the United Nations Committee for Development Policy in terms of gross national income per capita, human assets index and economic vulnerability index. Politically, the country held its 11th national elections on December 30, 2018”.

However, Selim Raihan, an Economics Professor at University of Dhaka speaks of ‘jobless growth’ when analysing rising unemployment with the rising growth of the economy in his article, ‘An anatomy of growth in Bangladesh’ which was published in the opinion page of a national English News Daily of Bangladesh on 8 May, 2018, Friday.

Selim Raihan points out that around one-third of the labour force in Bangladesh comprises of youth, and the unemployment rate among the youth is much higher than the national unemployment rate of around 4.2 percent which is a matter of great concern. In 2013, youth unemployment rate was 8.1 percent, which increased to 10.6 percent in 2016-17. This shows that the young people of Bangladesh are not having jobs after graduation.

The students who sacrificed a lot of energy, time and money of their parents, aspirations for getting a job remains a dream never coming true. A lot of students get isolated from the society having depression, involving themselves in different kinds of anti-social activities such as drugs or extremist activities. This is not beneficial for the family, institution that they have studied in or for the government.

The problem is very bigger, but the solution has to be even bigger in order to strike a balance between a sustainable economic growth and employment generation. “There is not enough economic diversity in the country. The current sectors are not good enough to provide the number of jobs that you need,” said Sudipto Mukerjee, UNDP Country Director in Bangladesh. I strongly agree with Mister Mukherjee. If there were diversified sectors such as more economic zones in different areas, more specialised hospitals such as cancer hospitals or kidney hospitals, more information technology-based jobs in rural areas, then more young people of Bangladesh with dynamic skill-set would be having jobs and serve their families as well as the country by contributing to the economic development.

Given the fact that the population of Bangladesh in 2019 is 167,823,984 (as per Worldometers site based on United Nations statistics) it is difficult to meet the challenge of striking a balance of sustainable economy growth and good unemployment rate at the same time. There are many problems of proper skill-set which also barrs the young generation from having their dream jobs.

However, there can be more diversified labour-oriented industries in Bangladesh as there are a lot of young population who can contribute to the needs of the people. The government has already opened up numerous vocational training institutions but these are not adequate. Besides, these intuitions can also teach English language and computer proficiency to groom the young people to cater to the challenges of the twenty-first century.

As it is a global world now this would also aid when the garments workers and staff are interviewed by foreign buyers, international media reporters and researchers. Md Sabur Khan, Chairman of Daffodil University, said giving focus only on the tertiary education won’t be fruitful because the mindsets of students are formed at a much earlier age. Hence, the Ministry of Education and University Grants Commission has some responsibilities in shaping academic curriculums for primary and secondary level to enable students to be able to handle some aspects of the employment world after graduation, hence focus on teaching practical aspects rather than mere memorising of theories.

Manzoor Ahmed, Professor Emeritus of BRAC University is very concerned that with frequent changing in technologies, traditional jobs are less in demand, another significant reason of youth unemployment. Prime Minister Sheikh Hasina has taken strong initiatives which assure that Bangladesh will use technology and knowledge to create skilled manpower from the youthful population.

Bearing in mind the well-organised plan of the government to achieving middle-income country status by 2021 and a developed country status by 2041, the country cannot lag behind in creating different kinds of jobs for the people, especially the youth which forms one-third of the population. A collective meaningful effort for diversification and structural transformation of the economy having more labour-intensive industries with high productivity sectors can make a fair play among the two areas.