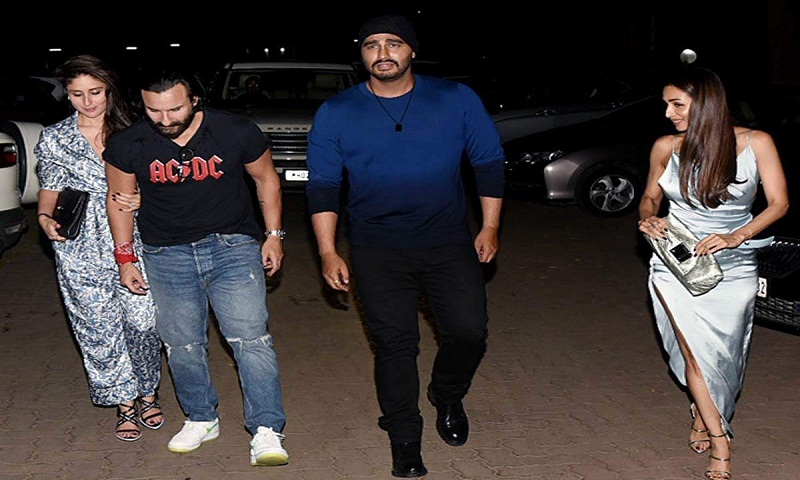 Actor Arjun Kapoor and reality show judge Malaika Arora continue to make joint public appearances amid the rumours of an upcoming wedding. The two partied on Saturday night at a friend’s residence in Mumbai along with their industry friends including Kareena Kapoor and Saif Ali Khan, reports HT.

Arjun attended an event in the evening and later joined Malaika for the party. While Arjun was dressed in blue T-shirt and denims paired with a matching cap, Malaika wore a sky blue, silk dress with a thigh-high slit. A silver purse and matching heels added to her look. The latter sported a new hairstyle which she also flaunted on her Instagram stories.

While Arjun and Malaika were twinning in blue, producer Rhea Kapoor and her boyfriend Karan Boolani also wore colour-coordinated black and white outfits to the party. Kareena wore a printed jumpsuit whereas Saif kept it casual in a black T-shirt and denims.

On Saturday, Arjun celebrated seven years of his debut film, Ishaqzaade and among the first ones to react to the post was Malaika. Arjun shared a short clip on his Instagram and captioned it, “Today marks #7YearsOfIshaqzaade & yet it feels just like yesterday when I gave my first shot for the film !!! Makes me emotional reliving the making of Ishaqzaade... I feel I was truly blessed to be a part of this amazing journey... it brought me love, livelihood and respect from the audience and gave me my fans so thank you to all my loving fans aka Arjunzaades !!! This day & this movie shall forever remain extremely special !!! @parineetichopra @yrf @shanoosharmarahihai.” Malaika responded with an emoji of hands raised in celebration.