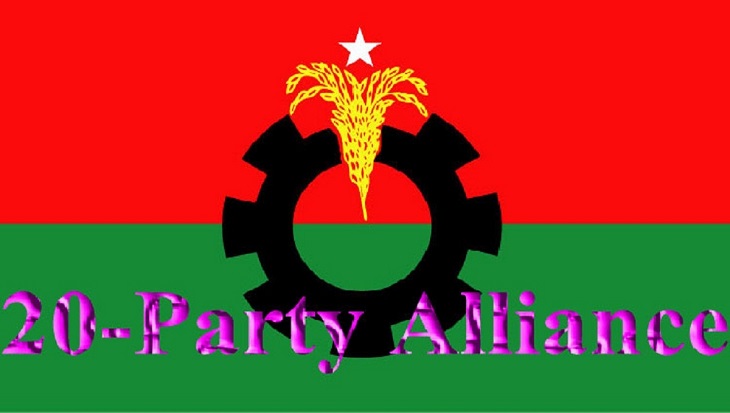 Amid strong resentment by some alliance partners over the swearing in by five BNP MPs-elect, the top leaders of 20-party alliance is going to sit in a meeting on Monday.

A top leader of the alliance, wishing anonymity, said the alliance leaders will seek an explanation from BNP over sending its MPs to parliament without consulting the alliance partners since they rejected the December-30 election earlier, reports UNB.

He said they will also talk how to revive the BNP-led 20-party alliance as a strong political platform alongside BNP's another alliance Jatiya Oikyafront.

Besides, the 20-party leader said they will discuss the country's latest political situation and work out their next course of action.

He also said they are trying to convince Andaleeve Rahman Partha, chairman of Bangladesh Jatiya Party (BJP), one of the key partners of the BNP-led 20-party alliance, to join the meeting revoking his decision to quit the alliance.

Earlier on May 6, Partha announced to quit the 20-party coalition for various reasons, including swearing in by seven MPs-elect of Jatiya Oikyafront.

Party also said they left the 20-party alliance as BNP has become too much Oikyafront-oriented one, while the 20-party a name-only platform to express solidarity with BNP's decisions.

A BNP senior leader said they will explain their position at the meeting and try to remove the grievances of the alliance partners to keep it intact.