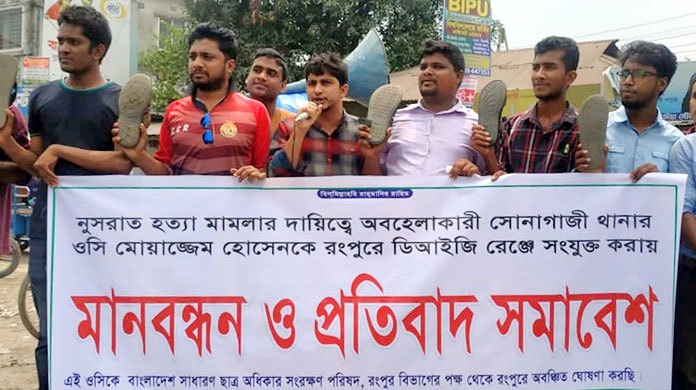 People of Rangpur raised their voices against Sonagazi officer-in-charge (OC) Moazzem Hossain as they learnt it that he was attached to the Rangpur Deputy Inspector General of police (DIG) office.

A group of activists of General Students' Rights Preservation Council demonstrated human chain and protest rally at Lalbagh intersection in the city around 12:00pm demanding withdrawal of OC Moazzem Hossain form Rangpur DIG office and his dismissal from job.

They also showed shoes to Moazzem from the rally.

Rayhan Sharif, convener of the council’s Rangpur unit, said, “Begum Rokeya, the pioneer of the Muslim women's liberation in the sub-continent, was born on the holy ground of Rangpur. So, there is no room for OC Moazzem in Rangpur, who helped Nusrat murder.”

He also demanded withdrawal of Moazzem from the Rangpur DIG office within 48 hours and his dismissal from service.

Exemplary punishment to all the accused was also demanded from the rally.

People of all walks of life in Rangpur got agitated and also reacted on the social media.

Earlier on May 10, police authorities suspended OC Moazzem Hossain on charge of negligence of duty in connection with the death of Feni madrasa girl Nusrat Jahan Rafi after an arson attack and attached him to the Rangpur DIG office.

The punitive action was taken against him following the recommendation of the probe body formed to investigate the Nusrat murder case.

Earlier, on April 10, Moazzem Hossain was withdrawn and attached to the Armed Police Battalion (APBN).

Besides, a case was filed against OC Moazzem Hossain with Cyber Crimes Tribunal under the Digital Security Act.

Supreme Court Lawyer Barrister Sayedul Haque Sumon filed the case on April 15 under section 26, 29 and 31 of the act for spreading a video on social media on Nusrat’s statement at the police station.

According to the case statement, the OC called Nusrat to the police station on March 27 after she filed a case against Maulana Siraj-Ud Doula, principal of Sonagazi Islamia Senior Fazil Madrasa, for sexually harassing her.

During interrogation at the police station, he asked her offensive and unpleasant questions over the incident. Later, the OC spread the video on social media.

Later, the case was transferred to the Police Bureau of Investigation (PIB).